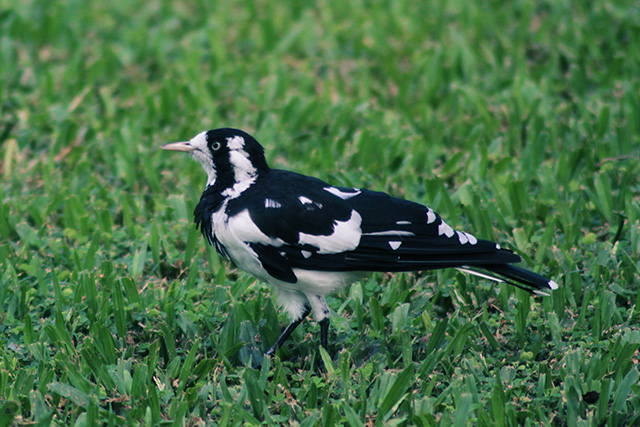 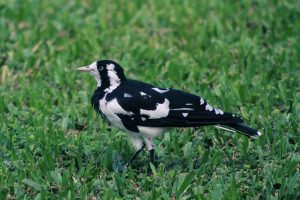 The beautiful Mud Lark or PeeWee, handsomely dressed up for a formal dinner, is a smaller, slightly different version to his cousin the Magpie. These birds will vigorously defend their mud-constructed nests, which are prone to collapse during heavy wet weather when the young may fall out.  Pee Wees will protect their young, dive-bombing trespassers and continuing to feed the dislodged fledglings until they are strong enough to fly back to safety.

They also have a well-developed sense of communication, calling out if anything comes by – which is where their name ‘Pee Wee’ originated, the male calls “pee” and the female responds with “wee.” (I must admit, I have not been able to interpret their call as such; however this is said to be the origins of their colloquial name!) It is easy to tell which bird is male and which is female; the male has a solid white bar over his eye and the female’s white bar is broken, so it is two patches of white over her eye. (Edited – I have since read that this is not true – I need to do some more research here!)

Pee Wees are very social birds, like Magpies, and convey similar messages if they make an appearance in your life. Research portrays these two species as being antagonistic towards each other; however I have often seen groups of the two birds feeding together on freshly mowed lawns, teaching their young how to feed. The PeeWee is also known to nest in the same tree as the Willy Wagtail, the theory being that the extra observers or pairs of eyes will identify predators more readily than one pair. A form of safety insurance!

In the Dreaming, it was the PeeWee that taught the first man about love and caused him to long for, and finally ask, the Great Spirit for a mate.[1] Pee Wees are certainly a symbol of love – for not only a partner, but for family and peers.