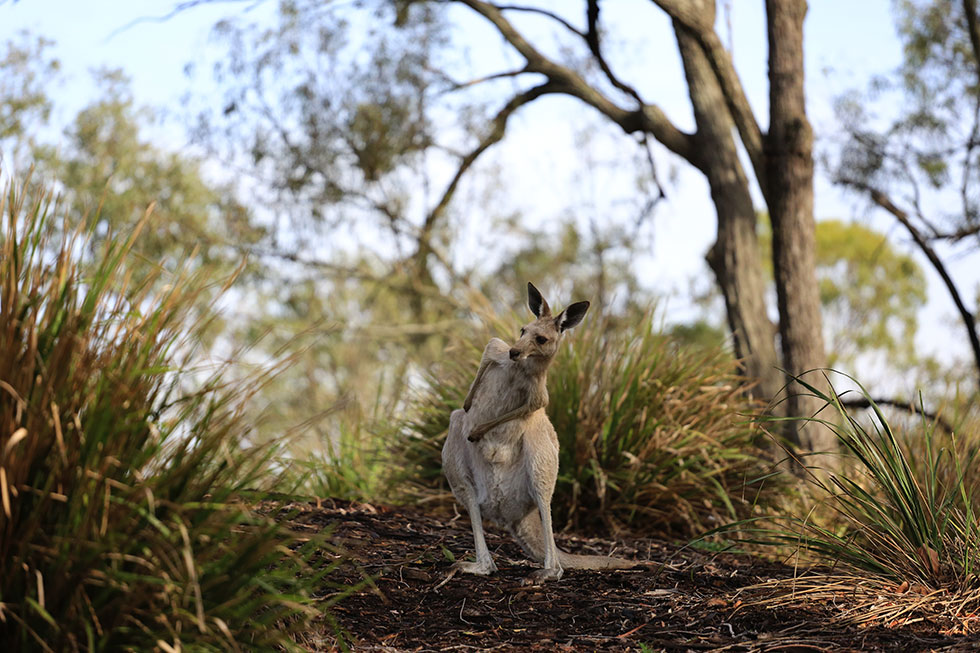 If you’ve got an itch, scratch it!

A popular and well-known symbol of Australia, Kangaroo is a favourite, unless of course, one is a cattle farmer!  Kangaroos feature in many children’s stories, songs and television shows, they make endearing characters (see ‘Dot and the Kangaroo’ clip below).

In the modern Dreaming[1], a kangaroo trying to make the leap over the harbour died, its bones forming the structure of the Sydney Harbour Bridge as we see it today. This was told to me by a young Koori fellah outside Newtown Station, Sydney in the late eighties. 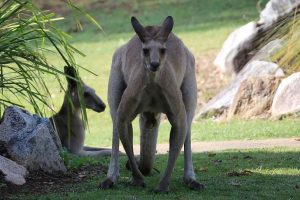 Kangaroo is held in high esteem, like the Buffalo is in traditional America.  Kangaroos provide fur, meat and sinew, and are commonly an integral part of Aboriginal spiritual lore. It is mainly a kangaroo bone which is pointed in the famous ‘pointing the bone’ rite and its related phenomena, although in some areas it is a jabiru beak or other item. (REF NEEDED) Kangaroo carries ‘power’ – and just look at those muscle-bound bucks with bodies of a boxer!

Kangaroos are intelligent creatures, and because they are wary and vigilant, they pose a challenge for hunters. On the other side of this, there are negligent, lazy mothers who contribute to the high mortality rate of joeys to dogs, dingoes and eagles.

Kangaroos live in large mobs and their relationships are well organised, containing a hierarchy. A mob of ‘roo might indicate social interactions when you encounter Roo in this way.

Kangaroo young are born very tiny and they crawl up to the pouch.  (Watch it all happen here!) During times of drought, the unborn embryo can be reabsorbed into the mother’s body – recycling or a clever way of utilising available resources? (Have you encountered kangaroo during drought?)

Look out for some insights around generosity, if Kangaroo bounds into your life.  It is because of Kangaroo’s kindness and consideration, all female marsupials have pouches[2]. The downside of this is going to extremes to help other people, wearing yourself out in the process! Kangaroo, especially with joey, can highlight your relationship with your mother, other mothers or children, or your ability to nurture others, regardless of your sex, or yourself. The kangaroos in the children’s classics, “Skippy the Bush Kangaroo” and “Dot and the Kangaroo,” are very wise, kind and helpful guidance.

On the opposite side of kindness, Kangaroos have been known to attack human beings. Some of these attacks have been attributed to hand-raised animals that have been released back into the wild. They no longer fear people, and when a mate is nearby, food is scarce, or they feel threatened, attacks can occur.  If news of an attack makes an impact, look closely to see where you are being cruel by being kind. You may need to let something go before it begins to depend upon you. Some things need to fend for themselves with a total break; is there an element of rescue in your issue? And is this rescue necessary, or is it an inability to let go?

Male kangaroos box over potential mates. They stand on the ends of their tails and toes to perform an almost ritual-like sparring match that has definite rules. (REF NEEDED) By appearing much taller than they really are, the purpose is to intimidate. Kangaroo’s ability to make himself seem bigger than he really is could refer to something you have or see in others – over-inflated, unrealistic opinions or hopes; or for you to look below the surface of something that seems huge.

Kangaroo is such an important creature, with ‘her’ multitude of meanings as a symbol, that she has a shadow message as well. If you live in Australia, or visit, you will quickly see the road carnage. Kangaroo in death is not uncommon if you drive ‘outback’ and in some places, the outskirts of civilisation. Think about this one as a more personal symbol for yourself – have you cut yourself off from something nurturing in yourself or someone else, perhaps around caring for others or parenting?

And a direct hit – scary! Kangaroos instinctively attempt to leap over blinding car lights, making a hit virtually inevitable if they are not seen in time – as a symbol, a shock like this is an important message to take stock somewhere in your life and prepare for anything you could predict. “You can’t prevent what you can’t predict” from “Black Anna” by K.M. MacAulay sums it up well there.

In the Dreaming, Kangaroo, unable to resist the rhythms of the Kooris dancing, joined in[3]. The people were amused and copied his dance, thus we have the origins of the “Kangaroo dance.” Because the kangaroo joined into a sacred dance, instead of killing him for being present at something very secret and beyond his initiation level, the people initiated him. Kangaroo is regarded as being very wise and spiritual.

The origins of his gait are attributed to when man first came to the mainland of Australia. To escape a hunter, he used all four legs (instead of his usual two), and so leaped, adopting the movement for good. Kangaroo has the ability to try out new ways of moving through the world, and favouring what works the best.

[1]       Apologies, I have somehow lost the reference here from when the original text was pasted over. The following too:

Clip from the movie “Dot and the Kangaroo” –

An interesting doco on kangaroos – 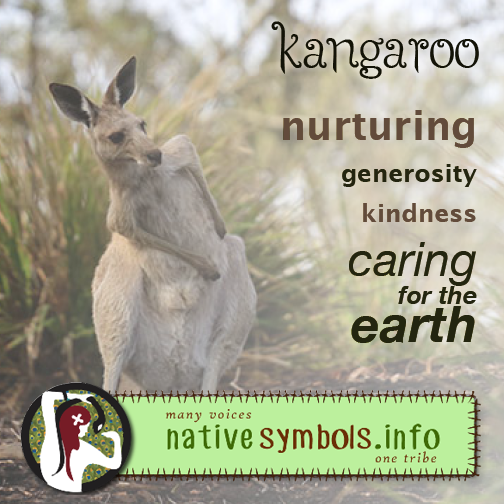