If someone is acting the Galah, they are up to some rather silly antics!  Galahs can be seen in large flocks, in trees, feeding on the ground, or caged as a pet.  They are very fond of aerobatic displays, pinks and greys alternatively flashing against the brilliant blue skies.  They feed and fly together in flocks.

Galahs are one of the few native species which have benefited from European culture.  They are very common in wheat and other grain growing regions.  A greater availability of water, especially in remote areas, has also contributed to improved breeding conditions. 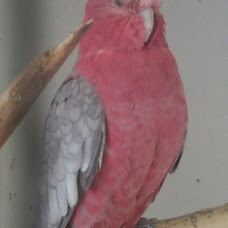 Popular pets, some Galahs learn to speak and mimic other sounds. As a native symbol, Galah can sometimes mean learning without understanding, or understanding without integrating this increased awareness into one’s actions.

Dreamings about Galah attribute his pink breast to blood lost in battle.[1]   All Galahs carry the memory of both bravery and pain on their breast – what memories do your scars carry?  Transforming pain into something of beauty, and holding this close to your heart, can be a part of the process of flying free. As the world looks up to gaze at beautiful galahs freewheeling, their pink bloodstained breasts evident against the sky; remember; you too have something to show-off which represents pain transformed into joy!

Galah, like Cockatoo and the other parrots, also represents the archetypal comic.  This is obvious in their youthful, noisy sense of play, at which times they are totally in the ‘Now’.