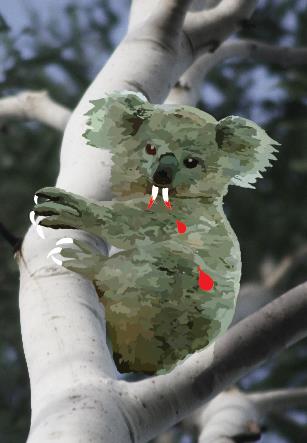 The Inside Scoop on the deadly Drop Bear! 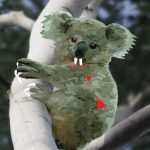 The recent announcement of koala Borobi as mascot for the 2018 Gold Coast’s hosting of the Commonwealth Games reminded me it was time to put up a post about this challenging symbol!

The news report I saw described him as a drop bear in jest as he dropped via a parachute, however it does appear he has created some controversy that challenges creative copyright!

But to the matter at hand, and yes, I’m avoiding getting into the guts of this one – because it does entail some entrails! Are you ready to face your own worst nightmare?!

The Australian Drop Bear has been around a long time, some people claim he’s folklore. ‘Look up and stay alive’ when walking out bush, as this ferocious beast could well drop from the trees and eat you alive!

As an urban myth the drop bear emphasises the stereotypical view of Australia as a dangerous country.

Do you like tricking tourists, young ones, whoever… with warnings about drop bears? Were you tricked yourself? What would encountering this myth mean in your life? Is there perhaps something you fear, that really, is as innocuous as a myth but shrouded in facts that make it seem real?

Drop Bear calls for self-introspection around your own dark myths that keep you on edge – that don’t need to!

There Are
0
Drop Bears in Australia