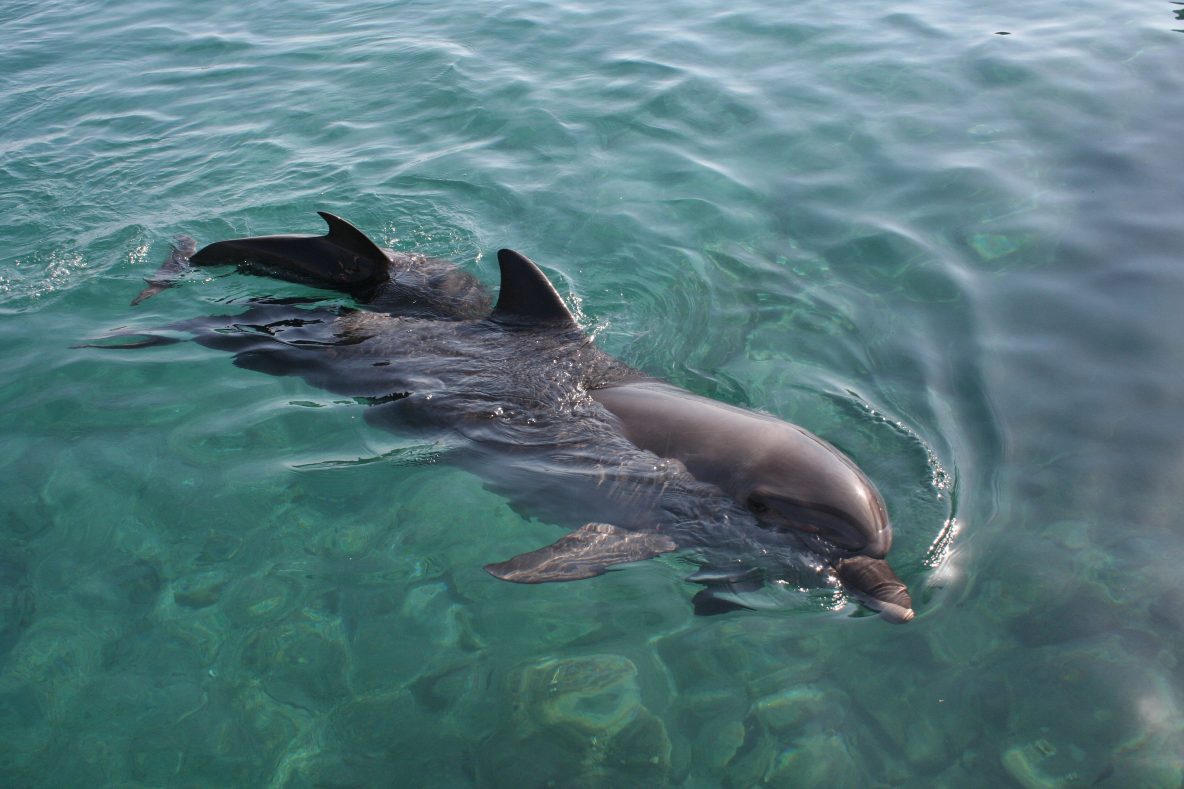 There are records of Aboriginal and dolphin interaction from the early days of settlement to as recently as fifty years ago; I heard a first hand account from the late Ted Gubboo Thomas years ago. The dolphins would be called from the beach, (either by whistling and calling, or hitting the water with a boomerang or flat piece of wood,) to herd in fish to the shallow waters to be caught.  Both benefited with a good meal!  This special relationship was mutually satisfying as it also represented the connection between two different species and inter-species communication.

Dolphin is the archetype of the child within. A Dreaming about Dolphin reflects the innate ability of these creatures for play, like joyful children.[1] However the Dolphins carried things too far with their teasing, similar to children who, being unaware and experimenting with personal power and human inter-dynamics, may hurt each other unwittingly, or more than they expected.

This aspect of cruelty is opposite to Dolphin’s popular appeal, however a few years ago the first ever footage was shown in the media revealing two dolphins tossing a live porpoise between them. Whether this behaviour was normal was uncertain although we do know the beautiful, carefree Dolphin has the ability to reflect our deep, dark cruelty shadow. And to get even deeper and darker, and flip this issue around – the dolphin killing at Taji in Japan… Sea Shepherd do amazing work in this area and the fight isn’t over yet… 🙁 (I had a dream once, I took my daughter to visit and when we got to the bay, it was FULL of dolphins and whales swimming freely…) It’s a confronting issue this one and I’ll leave you to explore it if you wish and create your own personal epitaph to lives lost in pain and suffering.

Unconditional love is one message in a Dreaming about Dolphin from northern Australia. She does not believe in her husband’s views thinking they are wrong, and blatantly disregards his wishes. Yet, when he is punished for his wrongs and changed to a human form , she yearns for him to the point where she heaves herself onto the land and is transformed into a human herself. Unconditional love goes beyond personality differences and theology, morals, etc.

Dolphin dancing in the frothy waves brings times for appreciating and expressing unconditional love. Again, the aspects of the inner child and cruelty of children reflect this – children can be thoughtless yet evoke unconditional love and total acceptance of who they are rather than what they do.

A dolphin midwife will assist in the birthing of the young, gently guiding the baby to the surface for its first breath of life.  Dolphins have also been linked with human waterbirth. What are you birthing in your life?  What projects are you giving life to?

If Dolphin emerges from the ocean’s foam, allow your inner child expression, to play and be in the NOW.  Surf life’s waves!  Connect with your essence of freedom, unity and joy; have some fun!

Dolphin also highlights relationship and communication – between others in your community as well as those of a different species.  Open your heart and make your connection within the web of life, network!  As you sense the unity of all life, (which transcends time; a few hours dolphin watching seems to pass so quickly!) allow yourself the delight of reclaiming your essence, that of a loving, powerful being born new in the wave of each moment.  Be as a dolphin!