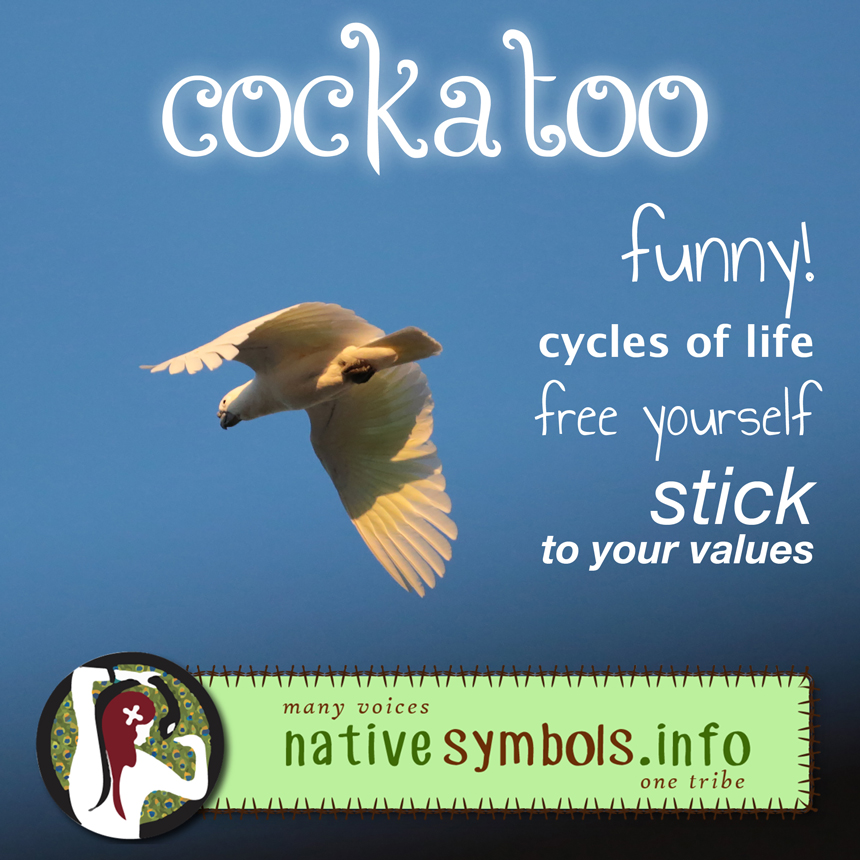 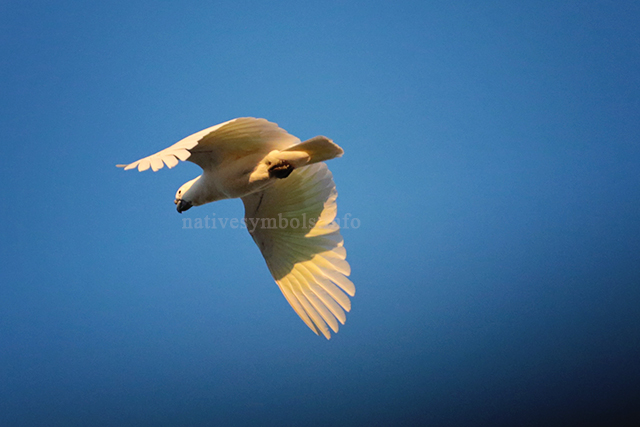 The Australian cockatoo is either black with striking red or red and yellow tail feathers (the female also has yellow feathers on her head), or more commonly, white with a yellow crest.  Both types represent powerful spiritual symbols in the Dreaming.

In their natural state, cockatoos nest in the hollows of large trees; a Dreaming[3] accounts for this: a woman lived with her man out in a swamp land, however she could not swim and missed her plains country. One time, while her husband was away, it flooded, so she climbed into the hollow of a tree. The water rose higher and higher, trapping her. Transforming herself into a cockatoo, the woman used her powerful bill to dig her way out of the top of the tree. To this day, cockatoos nest in hollows and retain their hooked beaks. Do you need to dig yourself out of a situation you feel caught in? Or do you feel isolated, not at home where you are?

Cockatoo also brings up issues of climate change with the floods that entrap the woman – or of feeling drowned by your emotions on some level. 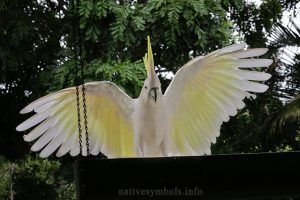 Wherever Cockatoos are, feeding or resting, they always have a sentinel on guard, ready to warn them of approaching danger.  This has become part of Australian colloquialism, a ‘cocky’ being a lookout.  One well-known context for this was for the illegal gamblers and prostitutes in Sydney in the early part of this century.  A cocky was needed as a warning of approaching police! The issue of protection may be important too in your life, so be a cocky and keep a look-out!

These characters get into all sorts of mischief and comical situations exploring the wonders of life, and they appear to enjoy themselves thoroughly! If Cockatoo has flown into your life, singly or as a noisy squawking cloud, perhaps you need to be more aware of what is going on around you. Explore, satisfy your curiosity! Tho’ do consider cockatoos are not popular with everyone due to the damage they can make with those bills and in agriculture. 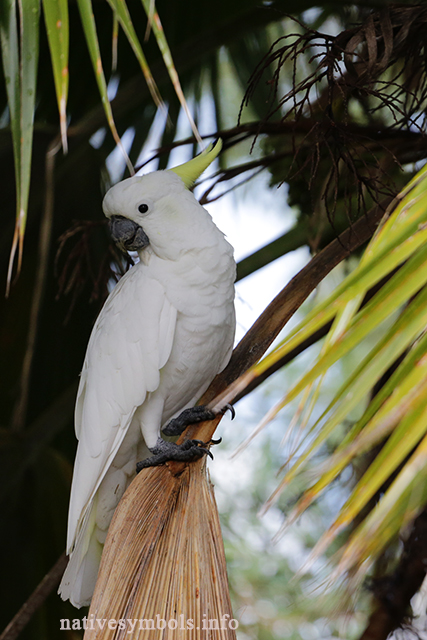 This is a comical visual for something so serious. If you relate to this Dreaming, where does ‘black humour’ fit into your life? Or could you try the Faster EFT trick of fake laughing to unhook yourself from the Yowie spirit? Imagine if these cockatoos turned back instead of pursuing Yowie; what would they tell you?

In another Dreaming, (see Butterfly) it is the cockatoo that is the first creature to ever die, causing the beginning of a quest to understand mortality.  The result – immortality through rebirth in the transformation of the egg, caterpillar, coocoon and butterfly. (Reincarnation?)

White cockatoo is a popular caged bird worldwide. Your interpretation of cockatoo here would depend on the personality of the bird – was he loud and talkative, quiet and subdued, young and raucous, or old and bedraggled?

Cockatoos can be affectionate and social pets, much happier with a partner than solo. Is this the case for you? Some birds become so bored alone, they pluck their feathers out of frustration – do you self-inflict something similar? Or have some obsessive compulsive patterns?

Older birds of over forty or fifty years of age are often ‘naturally’ bald, looking like overgrown fledglings. If this is how Cocky crosses your life’s path, be prepared to look at issues around aging or being dependant; or maybe bald Cocky tells you it’s time to be getting beneath the surface of someone or something . If cocky in this state makes you feel cold, cover up, on some level!

I remember jackaroos on an outback property taking delight in shooting cockatoo nests because they exploded in a burst of white feathers. I mention this as it is a fact there are people who do not think twice of killing for pleasure. Cockatoo is an easy target, and spectacular. Cockatoo is sometimes viewed as a nuisance and ‘dealt with’. Victims much? If you are involved in climate change XR Rebellion demonstrations, you might relate cockatoo with the name-calling and judgements from some narrow-minded people.

Or maybe a cockatoo bit you and you are the victim? How do you feel victimised? Or invaded? Cockatoo might ask you to look at their nuisance angle – and remember, before colonisation, there were truly free – is it maybe time to decolonise – switch off (devices, interruptions) and ‘naturalise’ yourself? 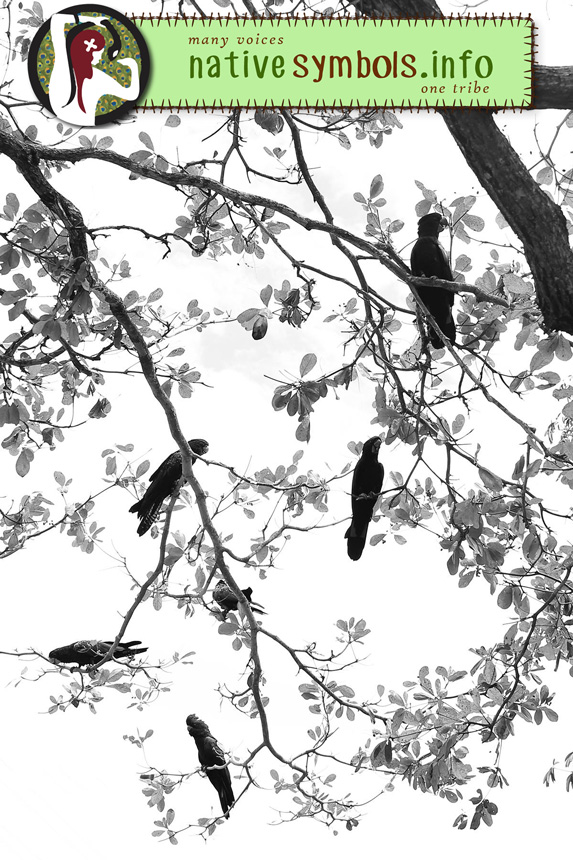 The Aboriginal people of Melville Island believe a flock of screaming black cockatoos accompany the newly deceased to the ‘other world’, thus heralding their journey[1]. This is a deeply spiritual and symbolic view and one that is easy to believe – they are magnificent creatures. Black cockatoo might bring things like synchronicity, dreams and wonder into your life.

According to bush lore, Black cockatoos will screech before coming rain; rain on another level representing the emotions, nurturing, sustenance and replenishment.

The Black Cockatoo is rare as a caged bird. 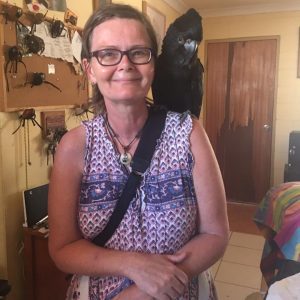 Max was handraised and imprinted onto humans; he has no interest in his own kind.

Record your encounter with Cockatoo with the FREE worksheet you can download from the shop to print out or fill out as an interactive pdf! 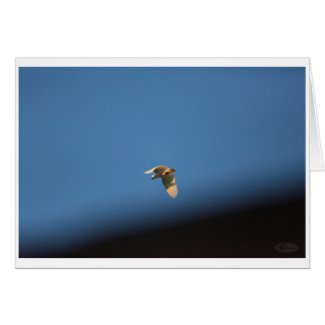 The meaning of cockatoo in your life as a symbol.