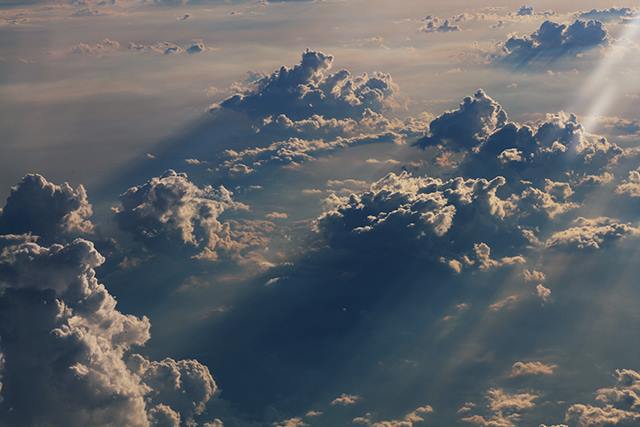 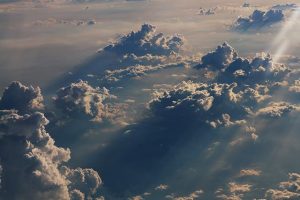 In the Aboriginal Dreaming, it is believed that clouds were created from the first spout of water which emerged from the airhole of the first Whale.

In another, inland Dreaming from the Kalkadoon people around Mt. Isa, (see Dingo) the clouds take pity upon a crying woman grieving over the loss of her child in a bushfire. The clouds ask the sun to intervene and bring her children back; however the sun cannot do this, so he places their spirits into some parrots. This is why parrots, when they chatter, sound like children talking. Clouds here exemplify compassion. Intervention, mediumship, communion with spirits, and things of a metaphysical notion may be in the focus.

In this Dreaming, the clouds act as an intermediary on behalf of the woman, although she does not realise this. Clouds are often linked with the emotions; cloudy, rainy weather symbolising depression, and storm clouds representing anger and the fury of nature. The link with the emotions (sadness and tears) and clouds is also connected with water, which is what they are made of! Their benevolent nature in this Kalkadoon Dreaming can also be seen in their ability to break a drought – in praying for rain, clouds can be seen as again playing the role of an intermediary. (Flood, on the other hand, is another extreme, with snow.)

In another Dreaming[1], a man longed for a woman, but because he was a stranger who roamed the land, no-one would give him their daughter. He decides to go to the sky world and take all the water, so the people would thirst for a drink as he thirsted for a wife. The man fills a big bucket with water, but the thunder man tells the lightning man what is happening. The lightning man throws his spear, breaking the bucket and causing rain to fall. To this day, the thunder man warns the lightning man when the bucket is close to being full, so the precious water may be released back to the earth’s peoples.

Do you have a similar pattern somehow playing out in your life? One where you seem to always be the one taking note and bringing warning (thunder) or acting to prevent (lightning) certain undesirable outcomes?

Many people, especially children, derive much pleasure out of constructing images from the patterns of clouds, especially the great, billowing cumuli nimbus clouds. This pastime is a wonderful way of exercising the imagination and stimulating creative thought. In many cultures, clouds could be the bringers of portents; different symbols appearing having varying meanings or messages.

On a more serious note, in the Dreaming[2], two initiates broke tribal law and as punishment were transformed into clouds; their tears of regret still fall down to us as rain. Fathers would point out their faces in the clouds as warning to their children to obey the laws of their tribe. So clouds can be a reminder to practice the quality of obedience! In their own way, clouds are true to the wind’s course; however another perspective would be that they have no free will.

Cumulus clouds, brought by the south wind, are thought to be Mullian the Eagle Hawk riding the wind’s back.[3] If you encounter cumulus clouds, the information on Eagle may be relevant for you to read.

Rain-making is a well-known skill in Aboriginal culture, performed by a wirrinun or magic man. The rites for bringing rain were, in general, conducted just before the wet season, to ensure it would happen. There are anecdotes from outback stations of situations where an Aboriginal man ‘causes’ a drought because of being wronged by a white man, to teach him a lesson; before finally relenting and ‘making’ it rain. These situations, and others involving rain-making, are inexplicable to science and the Western way of thinking but usually revolve around the issues of ‘teaching a lesson’ of some moral kind.  A beautiful story of a place where the rains are called in – lost for seventy years and refound: Click here

To some people of the Northern Territory[4], the lightning is caused by the Gecko brothers who throw boomerangs (the flash).

Thunder[5] is the sound of Waitch the Emu-woman complaining about the load of the sky. The job of the star people is to hold the heavens up, but sometimes too many go hunting and Waitch must bear that extra weight. Thunder was also considered, in the Illawarra area of NSW, to be the wrath of God for some wicked deed being enacted.