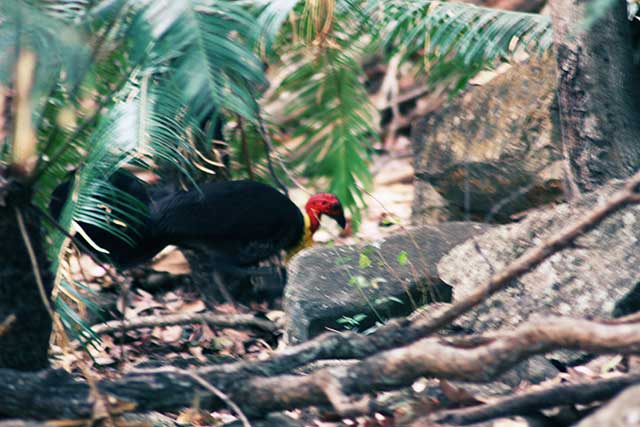 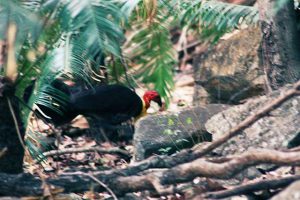 This unusual bird lays her eggs over a period of weeks in a leaf mound built by the male.  The male covers the eggs with leaves and regulates the temperature of the mound by testing it with his heat sensitive beak.  He will add or remove leaf matter as required.  When the chicks hatch, they dig their way to the surface, independent of their parents. Brush Turkey could have you examining stereotypical gender-based roles.

In one Dreaming, Brush Turkey learns something new by copying Turtle.  She decides she’d rather not waste time sitting on her eggs, especially if Turtle doesn’t have to!  So she builds a mound away from the river for fear of flood, and uses leaves due to unavailable sand.  Her successful adaptation is the reason why Brush Turkey still hatches her chicks like this. Who or what represents Turtle in your life? Can you learn and adapt by imitation?

Another Dreaming attributes the distribution of animals, birds and fish to the Brush Turkey[1]. They once lived together in a rainforest and the Brush Turkey was jealous of the other birds’ beautiful plumage.  One day she saw lightning hit a tree, so she collected the fire and spread it around, causing a big bushfire.  The birds and animals escaped, thus populating the world; the birds which flew over the sea eventually plummeted into the ocean, their feathers turning to scales and their wings to fins. Brush Turkey, singed by the flames, was left a dull brown colour, and she now carries a red badge of shame on her head as a reminder of the negative effects of resentment, jealousy and bitterness.

Brush Turkey is all about self-esteem. In yet another Dreaming[2], of which there are several versions, she is tricked by her status-hungry sister, the Emu or Brolga (depending upon the version) to kill most of her chicks. In retribution, Brush Turkey tricks her into cutting off her wings. If you encounter Brush Turkey, she brings issues around the theme of strong personal opinions and fixed viewpoints which are focused on the self in comparison to others.  How do you think others see you and is this perception accurate? Brush Turkey asks you to examine your attitudes, and what pushes your buttons, from another point of view. Don’t take things personally, could be another message.

The challenge is to find the good in any perceived negative situation. What are the benefits behind any perceived lacks in your life? Will you work on a ‘could be’ instead of regret over a ‘could have been’?

Brush Turkeys also appear as the two pointers in the Southern Cross. In one Dreaming,[3] a cannibalistic Brush Turkey was killed by two giant Brush Turkeys, who also acted as messengers of the Great Spirit. Brush Turkey at night might ask you to look at health issues and your personal ethics, especially diet-related.

Brush Turkeys are unusual in that they will join forces to kill a snake, circling and stamping their feet whilst drawing closer to their hapless victim. This ‘dance of death’[4], if you ever have the rare opportunity to see it, may highlight joining forces with others to eradicate a threat or confront a challenge which is too great to be faced alone.

Here’s an interesting short doco on the Brush Turkey: