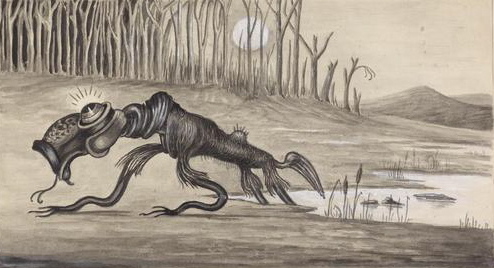 Bunyip is a mythical creature, according to right brain Western belief. Not so for those who can read the land.

In the Dreamtime, Bunyip sinned by eating his own totem, which by the law of resonance, was viewed as cannibalism. He was punished by Biami and banished from his tribe. He turned himself into a bad spirit, and held onto resentment regarding his eviction. This hatred keeps his spirit alive, so he can get his revenge by luring men into the water to drown. He takes  the form of a beautiful woman. The people used to request (pray) Biami would keep them safe from Bunyip.

Bunyip encountered can be startling and scary and perhaps fantastic! The bogeyman though, has power over you only if you are unaware it is an illusion, not really there. If you get sucked in to fearing “spirits”, prepare to enter a downward spiral on some level, unless you can recognise this is the ‘nature of the beast.’ Freedom from the bunyips of life requires a state of non-attachment to the appearance of negativity this spirit man projects – it isn’t real and substantial unless you ‘feed’ it with your desires, fears and worries.

You can read more about the Bunyip on Wiki.

Here’s the soundtrack from the children’s movie “Dot and the Kangaroo” about the Bunyip: