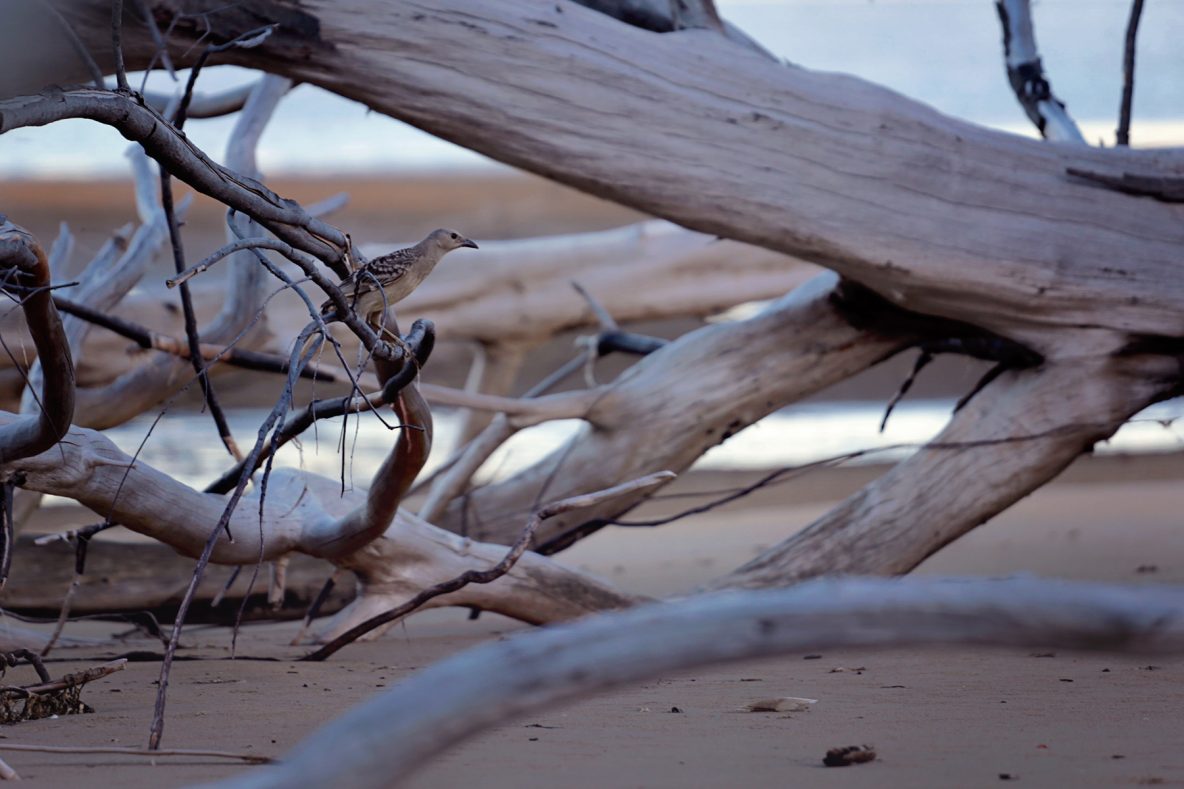 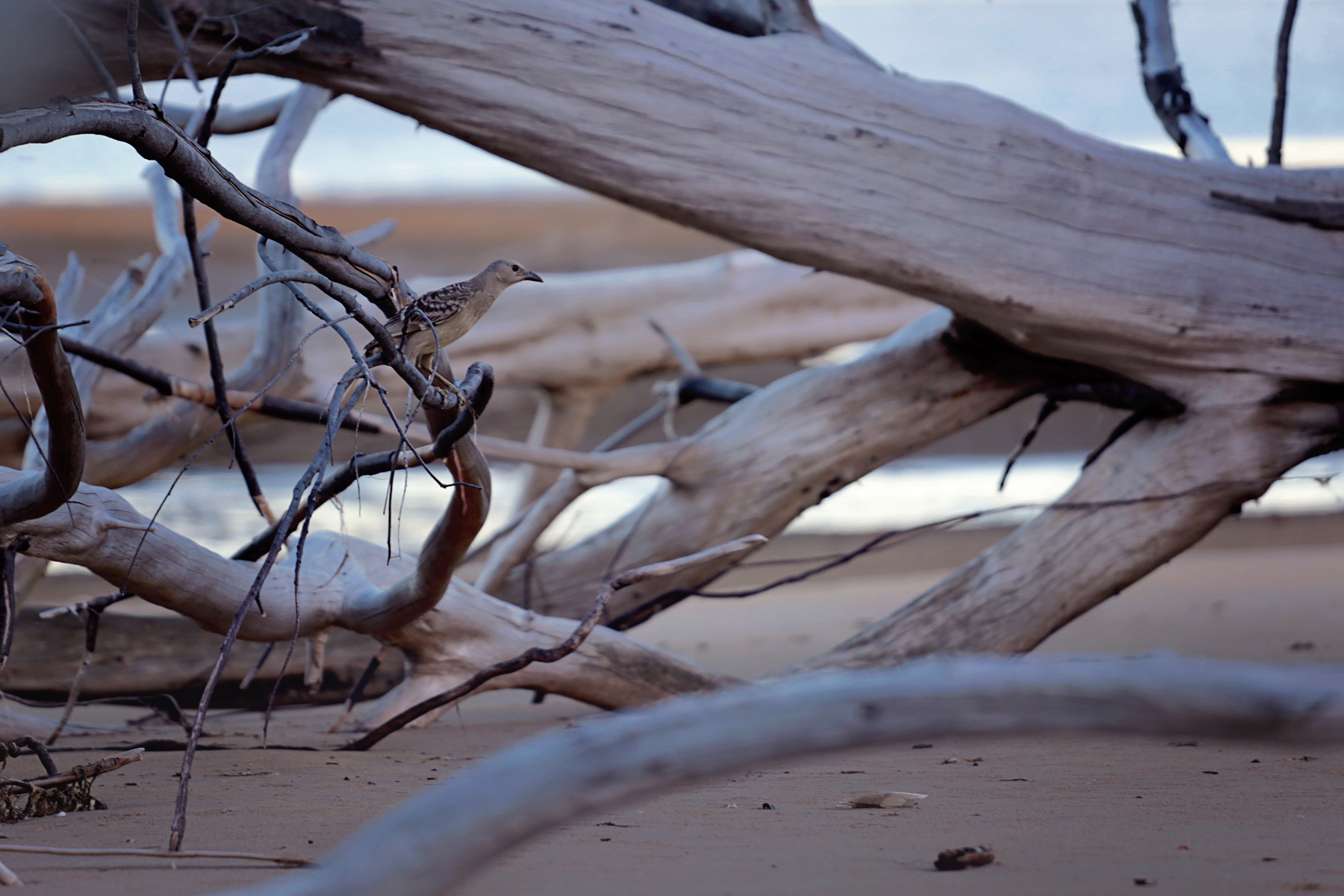 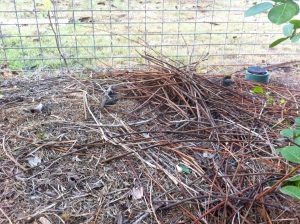 Beginings of a bower

A peak of avian evolution, and even a natural wonder, the Bowerbird has accomplished remarkable feats in architecture as some species have developed tool using capabilities.  The males construct elaborate bowers to attract a female and perform their courtship displays. These bowers are fabricated from sticks and are filled with bright and colourful objects such as shiny seashells, coloured pebbles, glass, flowers, fruit, berries, paper and so on.  The leaves and flowers are replaced as they wilt, often daily. Some species will show a specific colour or object preference.  Birds living near populated areas have been known to enter houses and steal ornaments for their bowers! A bowerbird at the local school has khaki plastic toy soldiers in his gallery; I’ve also seen syringes and condom wrappers.

The displays Bowerbird constructs is sexual advertising at its loudest! The birds themselves are quite plain; it is their artistic displays, rather than their plumage, that attracts the female. It seems that the more dull and drab a Bowerbird (for some have bright plumage) the more elaborate and colourful the bower.

Beginings of a bower

In observing the building of a Great Bowerbird bower, it’s a very ritualistic process involving dancing, sound, defence and collection. Other birds observe, some race in to pull twigs out, they sometimes tussle, hop about with wings held low making outrageous sounds. It seems, at least in the early stages, as much time goes into behaviour around the bower as it does in building it! In some ways, the male bowerbird at work is both an artist and shaman!

The Aboriginal people called this bird the ‘ghost bird’ because it may also collect bones for its bower[1]. If you encounter Bowerbird with bones, do you hang onto the old bones of your past – or are you able to ‘let go’ and release the past, especially past romantic liaisons? The association with ghosts might also be related to the fact that the bowerbird can throw his voice and imitate the sounds of dogs, people and other birds; things which aren’t there.

In the Dreaming[2], the bowerbird was a man who took much pleasure in killing people, by enticing them closer with sounds of prey. He is finally caught and as punishment, changed into the bowerbird with a short beak, instead of a long one like the spear with which he originally killed with. In effect, his power for destruction has been removed. Perhaps you take enjoyment in some pleasure which could be damaging to your health, or risky…. Changes need to be made before life’s circumstances bring them on.

Bowerbirds perform stunning courtship displays, and some are as clumsy as they are graceful.  It seems their dances are not purely for romantic reasons as they perform out of season – perhaps they are practising? Bowerbird caught dancing might remind you to enjoy life’s dance, whatever the season.

Incidentally, the male will often mate with more than one female and does not participate in nest building or rearing of the young. In relevant situations, single parenthood might be an issue.

If one of these extraordinary birds touches your life, art, beauty and pleasure are indicated. Attempts to impress and attract may be a compelling cause behind one’s actions.  Appreciation of the finer things in life is highlighted, however be aware if there is a tendency within yourself to overcompensate for any personally perceived physical lack; or on the other hand, to use personal beauty rather than talent to move through life.

Home-making and decorating are the more mundane aspects of this symbol, and Bowerbird can indicate a new home, re-decoration, renovation, and union (marriage). Above all, Bowerbird brings the dance of life, the joy of nature, romance, artistry and pleasure in construction to whatever endeavour you are working on.

Here’s a charming two minute doco on the bowerbird: