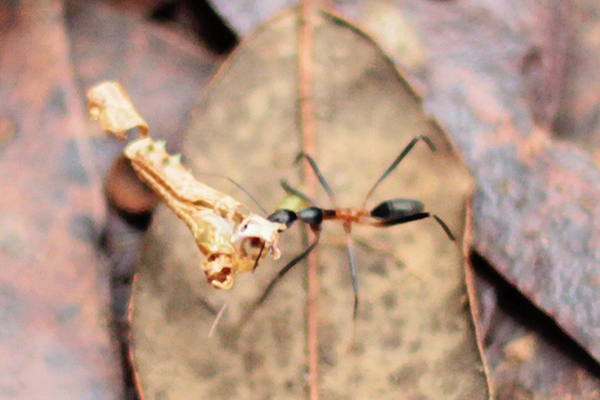 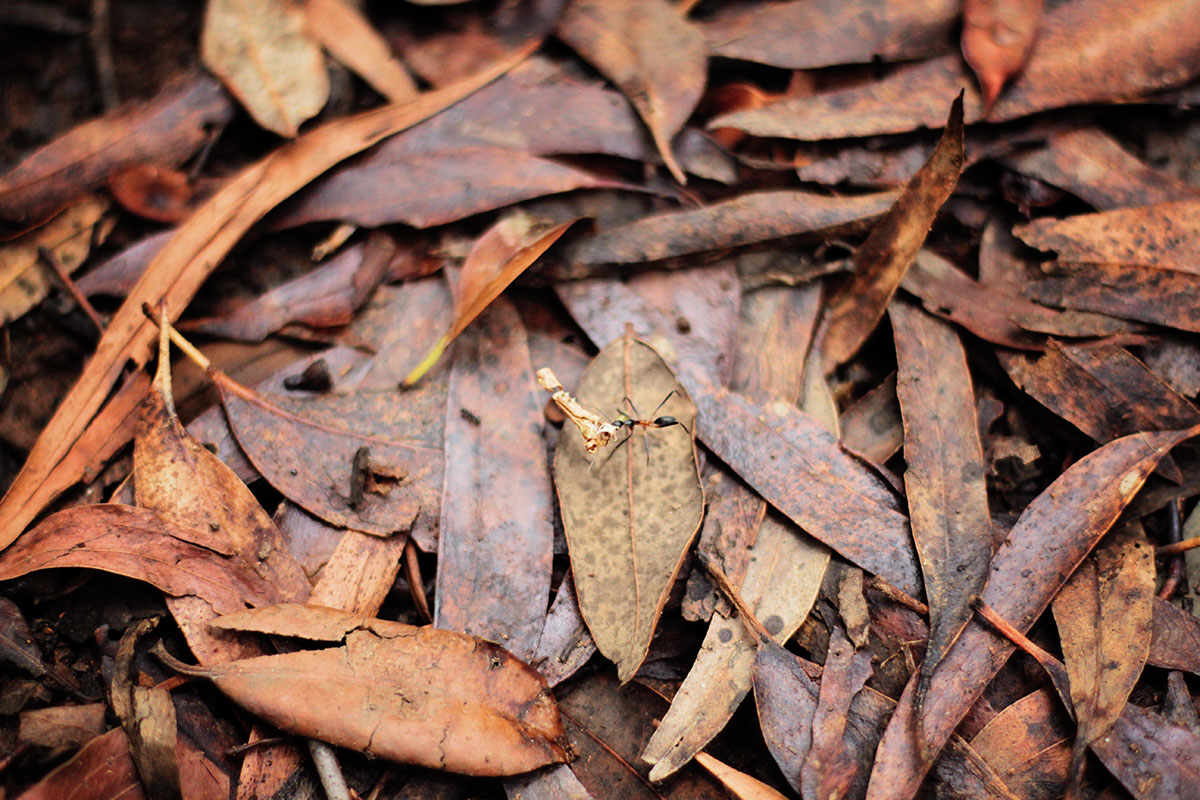 Ant with a load!

“You’ve got ants in ya pants!” Is there a young child who hasn’t giggled and used this ‘naughty’ expression?

Ants have the capacity to bring the giggles and squeals of childhood back – especially if you do get one caught in your clothes! Watching them as they struggle to carry a load far greater than their size can be fascinating… these tiny insects have entertained humans for centuries. This state of intense concentration (“ant watching”) is such that time disappears and the wonder of the NOW is present. Ant, himself,  concentrates with just as much focus as he may engender! Ant, as such, is an archetype related to work and communal endeavours.

For such a little creature, Ant can have big impact and wisdom that contains a multitude of meaning. In one Australian Dreaming[1], Ant nests are built to withstand the power of the willywilly (whirlwind) which, although it can storm and pull up trees, cannot destroy an Ant’s nest. The willywilly’s desire to raze Ant’s home was because Ant stole his food, piece by piece, in the dark of night. Ant took the food because the willywilly wouldn’t share. Even today, Ant will take any food hoards left untended and in the open. Ant will also find the smallest crack to get into what you think is sealed. Would this annoy you as much as willywilly was, causing you to unleash your own destructive wind gust in the form insecticide? Is there maybe something annoying in your life you wish to destroy, or is it something that could be accepted, or tolerated? It all depends on just how Ant infringes on your life as a messenger.

The energies of cooperation and concentration are evident when Ant has found food – multitudes truly concentrate together, working in  unison and focussed intensity. Big business is afoot!

For those plagued in their homes, Ant can teach you that no matter how tidy and organised your life may be, there will still be something out of sight. If you won’t share, Ant will help himself! Even the smallest crumbs are worth savouring!

Ant inside ‘minus food’ may refer to any level where you think you have cleaned and tidied, including habits, mental patterns and well-picked skeletons in the closet.  In this way, Ant can teach humility – or undermine your confidence, if you allow a judgment to be made. Ant can signify a time of cleaning up small details, so be grateful – especially if the worst of the mess is over!

Traditionally Ant may highlight community endeavours and working with others for the benefit of the collective group – or, depending on your attitude, just marching along, doing what you have to do, not for the love it. Take notice of the location of Ant and refer this place to the same place within yourself. For example, Ant in the kitchen may relate to issues of diet and providing sustenance for others; in the bathroom an issue might need to be released or cleaned up; and so on.

The smallest crumbs dwarf Ant who is able to carry many times its bodyweight. In Ant’s perspective the little things are enormous but worth struggling with! From another perspective, what you may be struggling with, although it seems huge, is not in reality.  Tiny Ant can encourage you to broaden your perspective. You are, after all, a giant… and giants are powerful beings!

If ant stings you, several Dreamings from the Northern Territory highlight ant’s ability to sting a dead person back to life… where in your life do you need to get more lively, so to speak? Where did ant bite you, what does that body part do? For example, ant bite on the leg might be saying it’s time to get going in some way in your flexibility in moving through life.

Other Dreamings attribute the red colouring of the meat ant’s body as evidence of their being the first creatures to possess fire[2] – maybe that’s why their bites have such a sting!

Bush lore states that an abundance of Ants means there’s big rains coming, or the upcoming wet season will bring a cyclone depending on where you live. Emotionally rain and water symbolise the emotions, so if this resonates and is something that feels true to you, look to see where you could prepare yourself emotionally in some way for something. This sounds a bit obtuse, however if it fits, you’ll know exactly what this is! “You can’t prevent what you can’t predict” as quoted from the book  “Black Anna” by K.M. Mac Aulay fits here!

Like Fly, Ant can indicate irritations – and not only at picnics.  Flying ants (or termites) are seeking a new nesting site and according to bush lore, are also a sign of coming rain. Their presence, although a nuisance, can point to innovative ideas and flights of fancy which form into new developments and projects in your life. Flying Ant, who has transcended the earth environment to achieve his needs more efficiently, comes into your life to bring a message. Is he in a safe environment where he can begin a new life or one where it is unlikely he will ever feel at home? Upheaval and change, movement and new beginnings are fanned into your life with Ant’s wings.

If you are lucky enough to sample honeyants which are a traditional Aboriginal bush tucker delicacy, these sweet treats are a symbol of the fleeting pleasures of life. The amount of time it takes to ‘harvest’ them compared to the crop is minimal, yet well worth the effort. Doing what you love, regardless of the work involved, makes even a small success even sweeter! Honeyants are a lovely symbol of seeking and attaining your dreams. Go for it!

Enjoy this fascinating look at the design involved in an ant colony… (RIP ants!)

And here’s the Dave Mathews Band with their epic song “Ants Marching” – are you one of the ants?