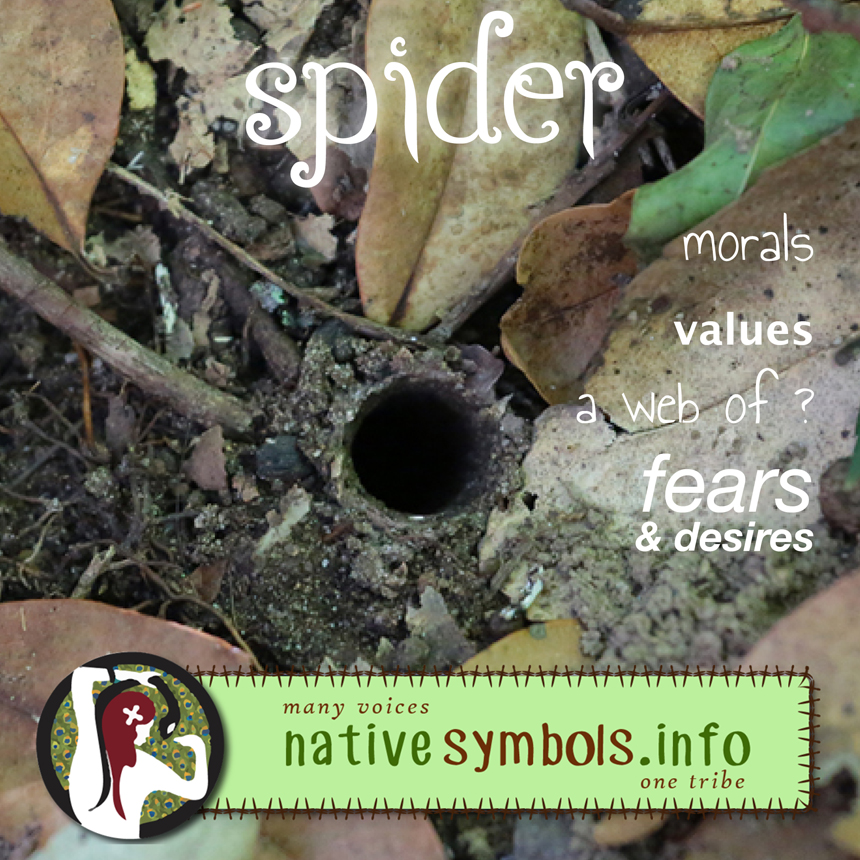 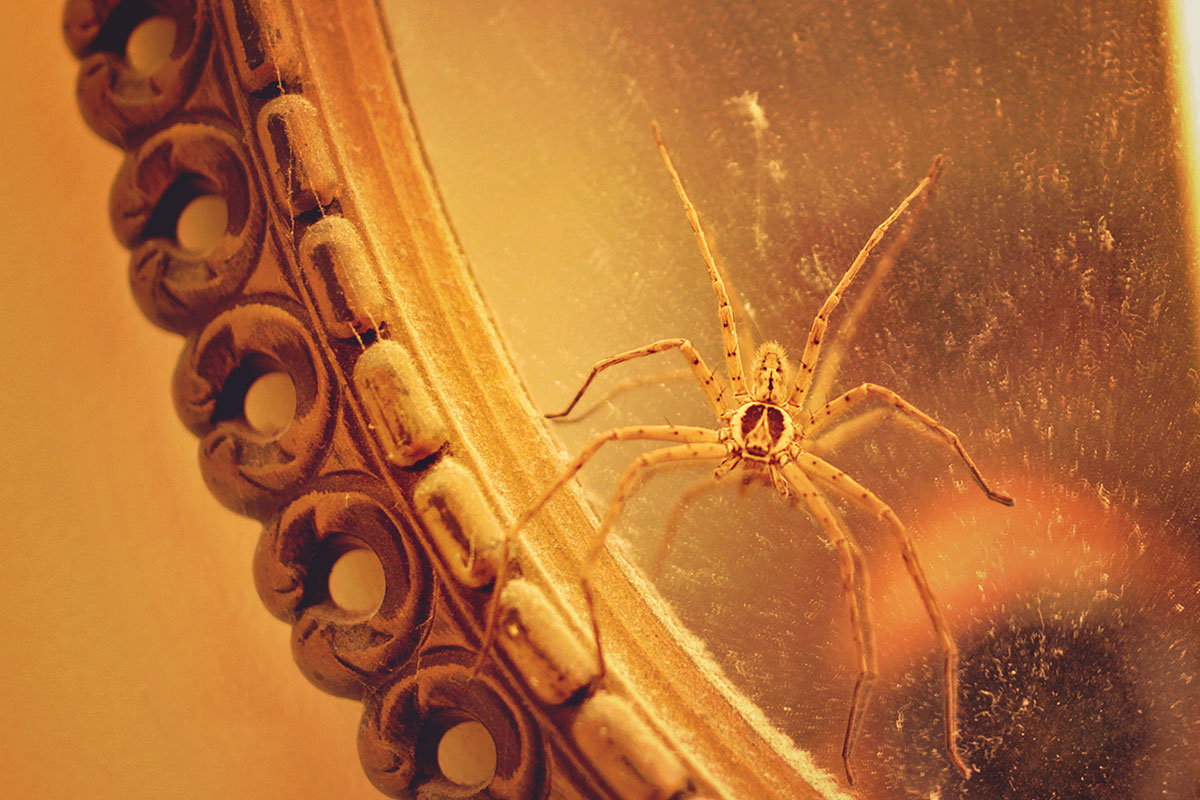 Huntsman Spider on my grandmother’s mirror. 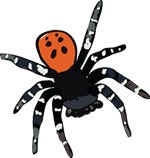 Spider has lots of different symbolic meanings worldwide. To many Australians the word ‘spider’ recalls the deadly funnel web and the red-back on the toilet seat (both species have been known to cause severe reactions, and even death with their bites). Or they might think of the harmless Daddy Long Legs with his mythical deadly venom.

An R-rated symbol – a Dreaming[1] from northern Queensland links Spider with sexuality and desire – a recently bereaved raunchy seductress (or ‘black widow’!) ignores propriety and focuses obsessively on her sexual desires, seducing some men and rejecting others. Her selectiveness causes trouble and jealousy among the married women, resulting in a great rift among the tribes’ people. In this Dreaming, Spider and her lovers turn themselves into spiders to escape punishment for not resisting their lusty desires. As a symbol spider can trigger strong emotion depending on your experience with them ranging from arachnophobia to obsession.

This Dreaming is quite in depth with drama, intrigue, magic, and, of course, desire and seduction. It teaches an important moral about sexual restraint and the importance of obeying tribal law (or your personal morals). As an archetype, it’s equivalent in the Bible would be the law not to covet another’s wife (or husband, as Spider did!)

Another Dreaming from the Victoria Desert region[2], has a young Spider girl who goes to great lengths to seduce a boy undergoing initiation. To remind all of the importance of obeying tribal law, they are now separated from their tribe, and each other, as two identical stars in the heavens.

The analogy of the seductive spider is seen in the web that entraps.  As a universal symbol, each type of spider can represent many themes; such as a money spider, a huntsman, a daddy longlegs, and so on. Power, charisma, sexuality, intrigue and cunning can be typical Spider qualities… though it is all flexible; a Daddy Longlegs might be more evocative of childhood and safety.

On the flipside, the opposite of seduction, one Dreaming has spider a faithful wife who is very good at weaving bags.[3] Her husband disappears, and a bad spirit abducts her, thinking of making a profit by bartering her bags – she just gave them away as gifts. She refuses to make them for him, in case her husband returns and finds her with another man, so the spirit makes a rope and ties her between two trees. To this day, the spider weaves her web between trees. This Dreaming brings up issues along being faithful, retribution, values, and even commercialism. 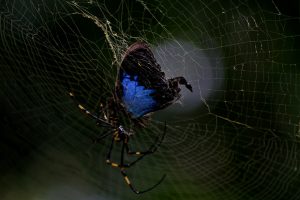 The web in various cultures depicts the web of life, fate and ensnarement.  A spider web is a sign to cast your own web, to actively seek what it is you want. If a web is discovered torn, it may be time to backtrack and cover old ground, to make amendments in some way. It is a good time to clarify your goals. Spider focuses on attracting her blessings, why don’t you? A web with plenty of entombed insects is a good sign your own web is strong and well constructed.

During the beginning of writing this text, I was bitten on the crown by an Eastern Monkey Spider. Until more recently, this spider was thought to be almost as toxic as the funnelweb. I was certainly sick!

If you encounter Spider in a web with a well packaged meal on store or a bundle of eggs or babies, think about having your own ‘nest egg”. If you kill a spider for safety, fear or by accident – was Spider ‘in the wrong’ to warrant death – or just in the wrong place at the wrong time? Understanding and accepting the negatives of life are a Spider lesson, as well as releasing the need for self-sabotage. How often do you plan to do something or make a change, then for some reason, it just doesn’t happen?  Or you get caught in another web, so to speak? 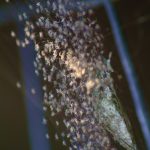 If you have no fear of Spider, and especially if you feel drawn to her, look at your life and see if you are not about to be caught in some seductively soft, strong silky threads!  You may feel passionate or excited about something.  Stop and look, is there an almost invisible web that can ensnare you in some way?  Or, are you weaving one yourself?

If you are frightened of Spider, look at the other fears in your life. What are you frightened of?  How does it affect your life?  Is your reaction to Spider similar to another reaction, to something else? What else in your life gives you these feelings?  Spider appearing can call for exploring your shadow side, that side which experiences fear, terror and powerlessness.  By bringing your fears into the light they are unable to sneak up on you unawares –“what you can’t predict, you can’t prevent”.

There are two other blog posts related to spider on Native Symbols. They are St. Andrew’s Cross Spider and Spiderlings. 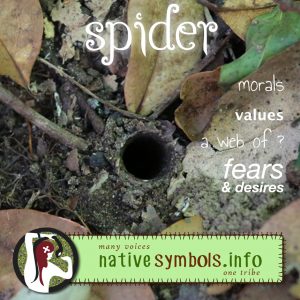 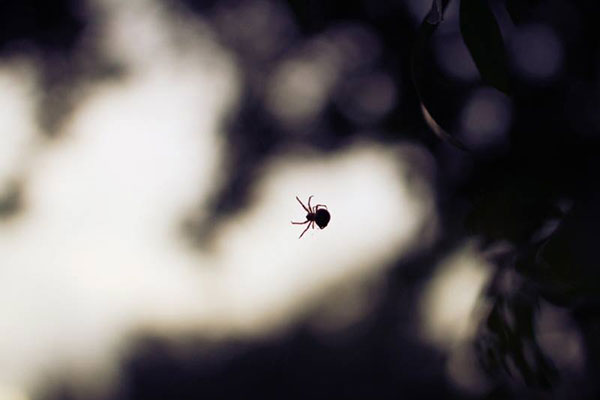 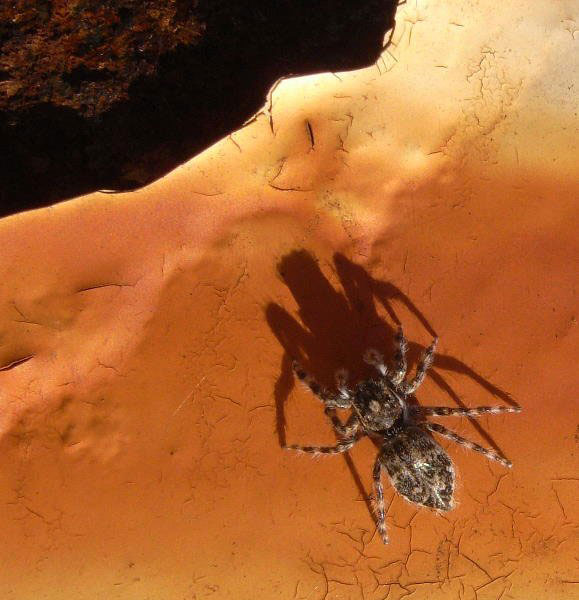 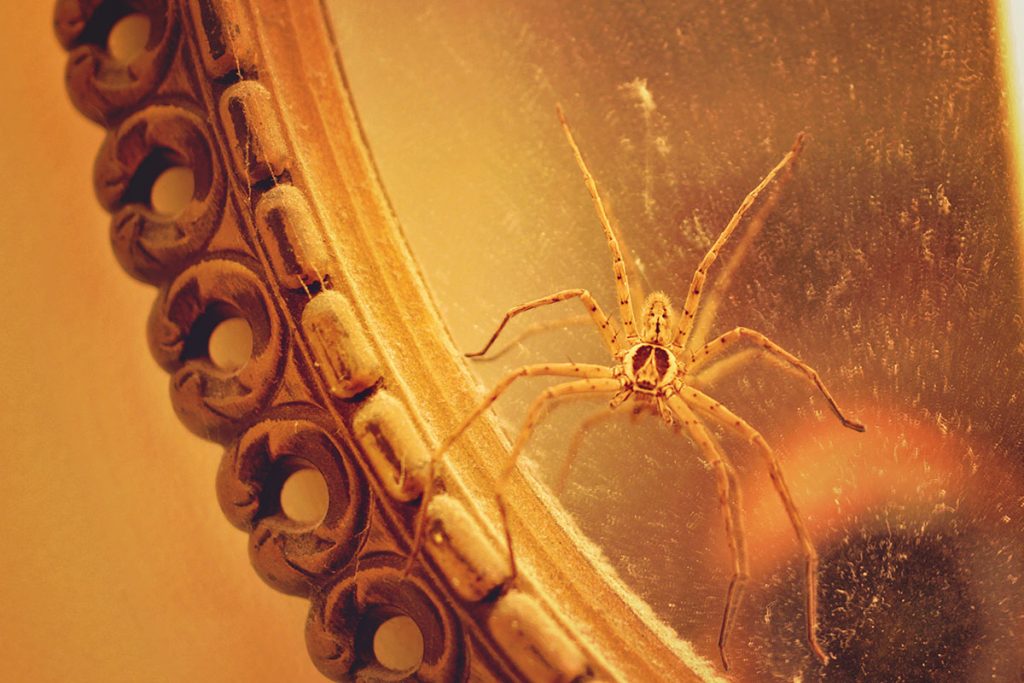 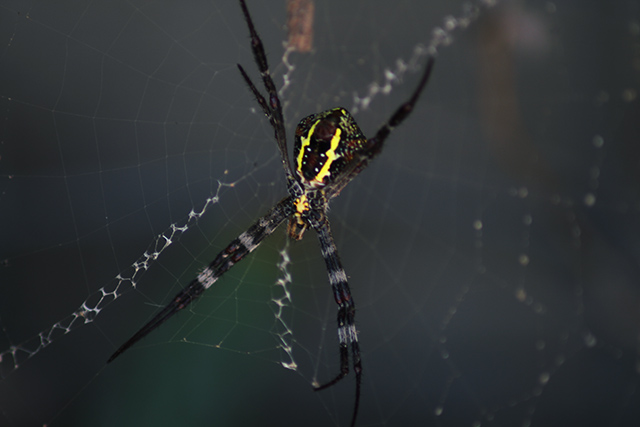 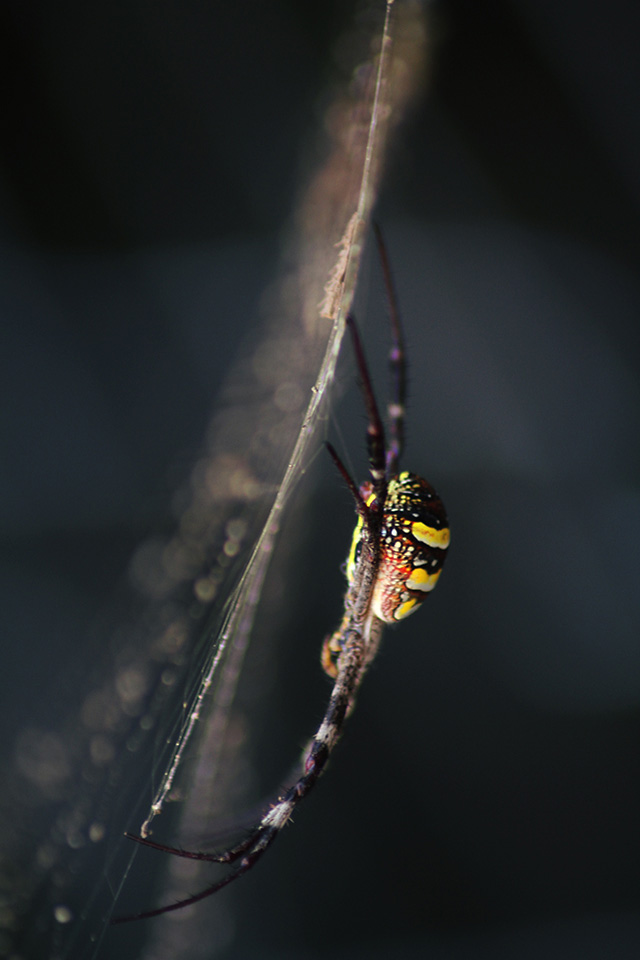 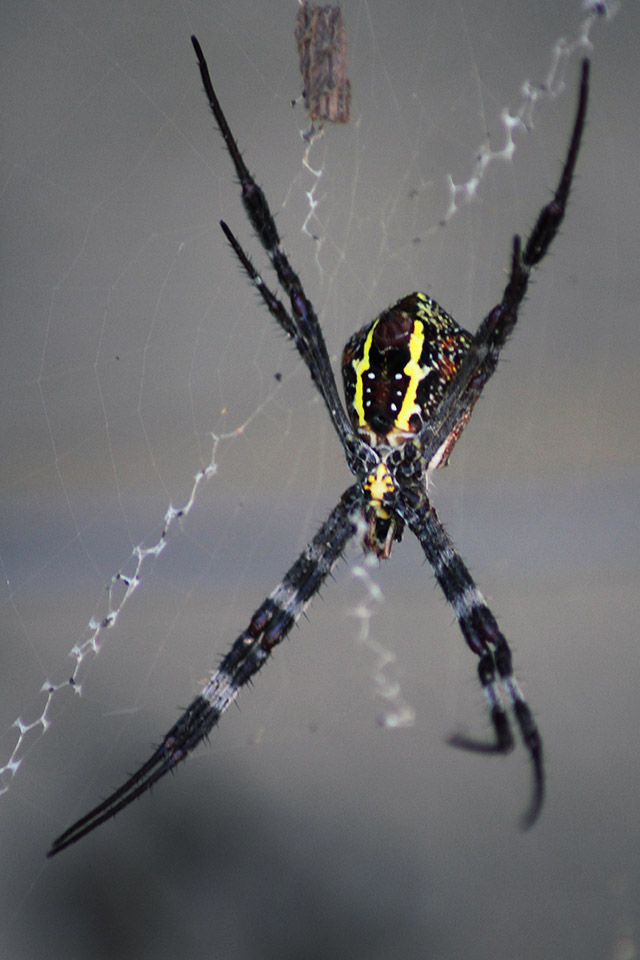 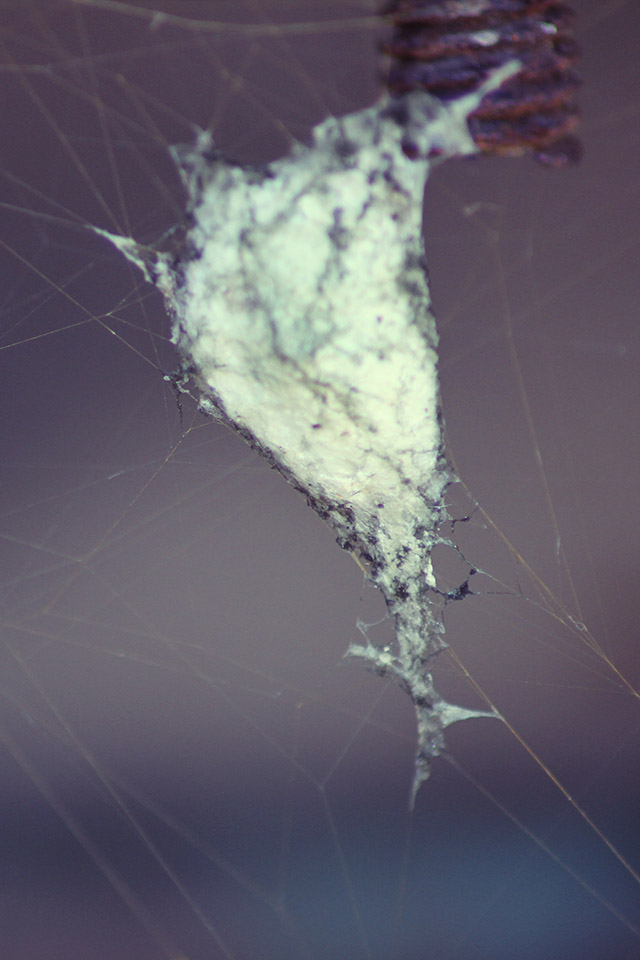 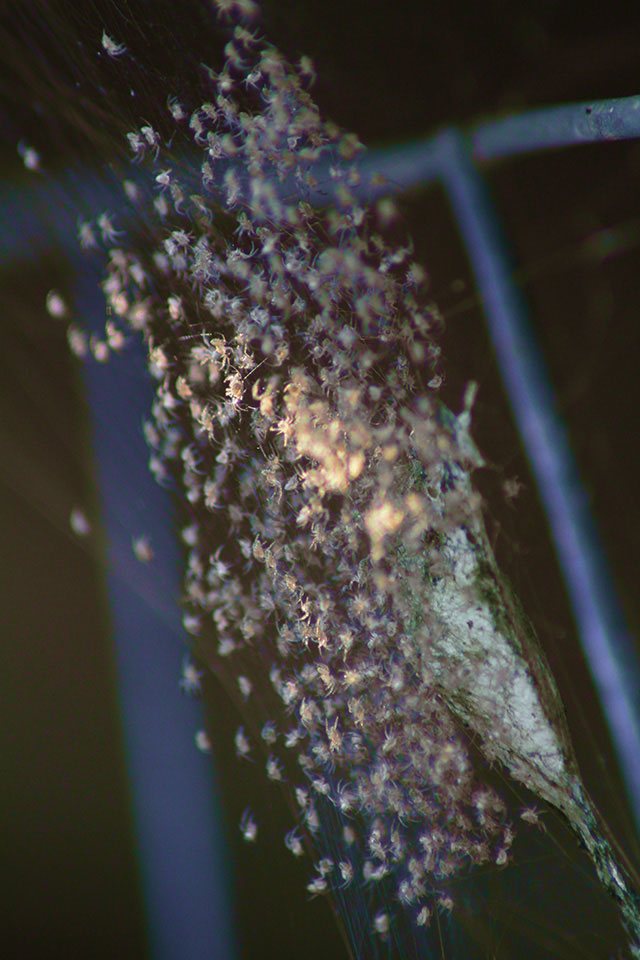 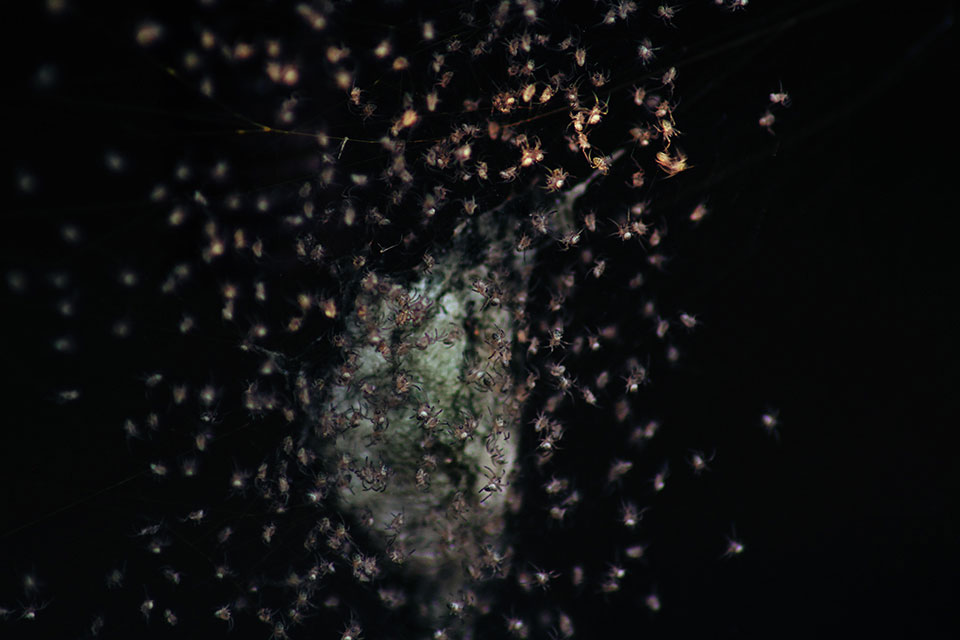