Australia contains the highest proportion of venomous snakes in the world.  However, they are very shy of human contact and will flee before attack as first option.  For reasons unknown to modern science, (the Dreamings have an answer though!), the swift neurotoxins of the deadly taipan and tiger snakes are ineffective against the largest monitor lizards or goannas. A deep enmity exists between the two species and a battle between them will often be evenly matched, although according to bushlore, the goanna is said to win often. No other native species can withstand this poison.

Snakes are a symbol of fear and evil worldwide, as they are also revered and worshipped as a symbol of rebirth and transformation.  As Snake sheds his skin we are reminded of our ability to change our old skin and grow something new; perhaps this could relate to an attitude or way of living. It’s always an inevitable change, and it requires a time of slowing down and resting.

Finding a snakeskin could remind you to acknowledge where you have grown on some level, or expanded your Self to be greater. Snake skins are a great sign of transformation, especially on the spiritual levels.

I have seen sleek red-bellied black snakes sunning themselves in groups on rocks along a creek in an isolated area, once the site of womens’ initiations. This ancient sacred place, rich in quartz crystals (red and black), also echoes the sounds of past chants and stamping, voices rising into the night like specters. Kind of creepy, but amazing and defying mental logic, for sure!

Many snakes in the vicinity can certainly point to strong metamorphic fields. These could be perceived as a time vortex where the past infringes upon the present – psychic energy is boosted and unusual things happen. It may be worthwhile to record your impressions and dreams, maybe even tune into the energy of the place through conscious meditation. Ancient Eastern beliefs link the serpent to kundalini energy, a high state of spiritual enlightenment.

Tigersnakes, in the Dreaming[1], were once the dingoes used for hunting people by a cannibalistic old woman. Death released the dingoes into these venomous reptiles, still able to kill but perhaps they learnt their lesson, as tigersnakes do not actively hunt down humans to consume them.

In the Dreaming, the Rainbow Serpent is part of the beginning of all, having created the mountains, rivers and landscape in epic journeys (or songlines) across the country. The Serpent always left special energies, like a record or morphogenetic field which can be tuned into, for example through corroboree, relaying the songlines or meditation. Snake will always call you back to the voice of the land in some way.

You may see the Rainbow Serpent going from waterhole to waterhole, he appears as a Rainbow.[2]

It might be time to clarify what you perceive as your life purpose – do you know what this is? Defining your personal “reason” for being can be used as a touchstone for staying on target and in harmony with your ideals. It’s a purpose that can shift and change, it isn’t static as the Rainbow Serpent’s journey wasn’t a static event in the past but a thread weaving through all time.

As creator of the landscape of your life, it is up to you just where your songline leads you… consciously defining your purpose and seeing this as the current in your life can add perspective and a sense of direction which bypasses perceived failings and in a literal sense, being snake biting its own tail.

The Rainbow Serpent is one of the great spirits and should never be angered because he would wreak great revenge causing drastic destruction.  This means living in harmony with the land and nature. Any serpent crossing your path emphasises your balance in life in this respect. 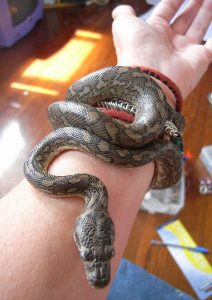 How safe was the encounter? Was it a close call; were you about to tread on trouble? Or this could this be an auspicious time to take Rainbow Serpent’s creation energies as your own, and become more conscious of what you are creating? Welcome the opportunity you have to wield your personal power, and create exactly what you want. Unless the archetypal Serpent of Eden waylays you…

The allopathic medical symbol of the sword (or caduceus) with double entwined serpents is a good one to visualise holding because it represents many empowering qualities including healing, health, acumen and decisiveness.

Snake is a very spiritual symbol and can point to transcendence over something that is out of harmony in your life.