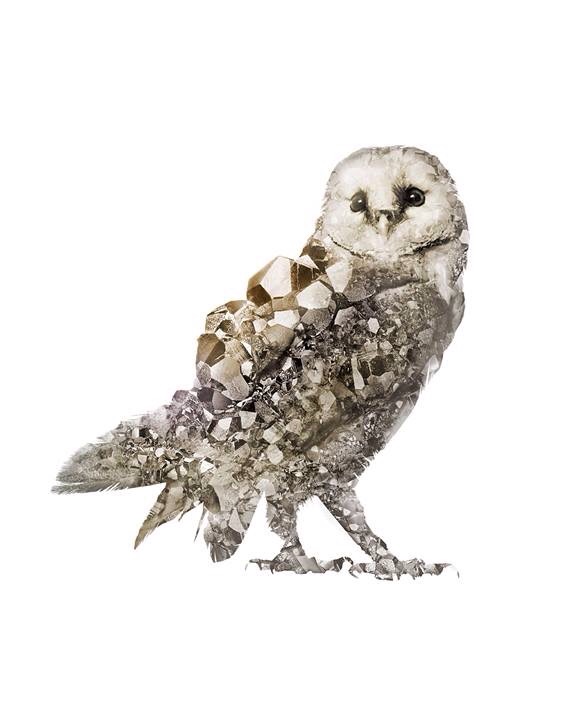 Nocturnal birds of prey, owls universally symbolise the powers of night, mystery, and wisdom.  In Aboriginal culture, owls were often a kobong (similar in concept to totemism) for women as a whole.

One Dreaming accounts for Owl’s distinctive large eyes. Owl and Cyclone were two men who shared a camp and hunted together. Cyclone was invisible, and Owl found this hard to understand. His eyes became large from staring, as he was constantly trying to see his companion. One night, while his friend lay sleeping under a kangaroo skin, Owl couldn’t resist having a closer look. Upon lifting the skin, a wild wind broke loose, flinging owl into the hollow of a tree, where he lives to this day. Are you a curious person, seeking the mystery of life and to understand what is ‘unseen’ or ‘immeasurable’? In seeking answers, like Owl, you might be ‘blown away’ by what you discover! 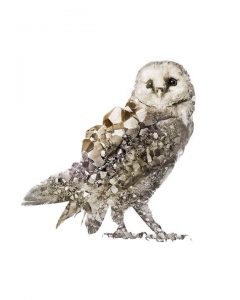 In another Dreaming, Eerin the grey owl was a very good watchman. He lived to an old age and was a valued member of the tribe.  When he died, the Elders performed a sacred rite, cutting themselves and allowing their blood to drip over his body, giving him of their life force as a sign of his highly held esteem.  That night, as they held a great corroboree in his honour, an enemy tribe, taking advantage of the distraction, crept upon them.  In the billowing smoke of the fire, they heard Eerin’s warning call.  Looking up, they saw a grey owl flying overhead.[1]

From this Dreaming, Owl can refer to the issue of protection, and implies there is a threat.  Owls are very alert, keen of hearing and sight.  They are silent on the wing, making them efficient hunters.  Owl can call for the use of the qualities of watchfulness and silence, coupled with alertness and awareness.  And this is where the archetypal wisdom of Owl is invaluable. Look at issues around safety and protection. Do you stay within your limits? Or dare beyond personal boundaries? Owl calls for listening to any warnings, follow your intuition and ‘play it safe.’

Nocturnal, owls have universally been linked to the mysteries of the night and the moon; to women and witchcraft, occultism, paganism, animism, myth and superstition.  The gaining of wisdom, too, is a strong focus – wise old Owl with his book learning and knowledge!

Mystery, wonder and magic is afoot. Owl symbolises special talents, and if encountered in the New Moon, the emergence of something new.  Owl during Full Moon can symbolise the fruition or rewards of practicing one’s talents.  It can point to acceptance and recognition in some way.  In the dark of the moon, take particular notice of your dreams and their ability to convey sub-conscious issues influencing your life. Things may seem to be especially mysterious and hidden at this moon time.