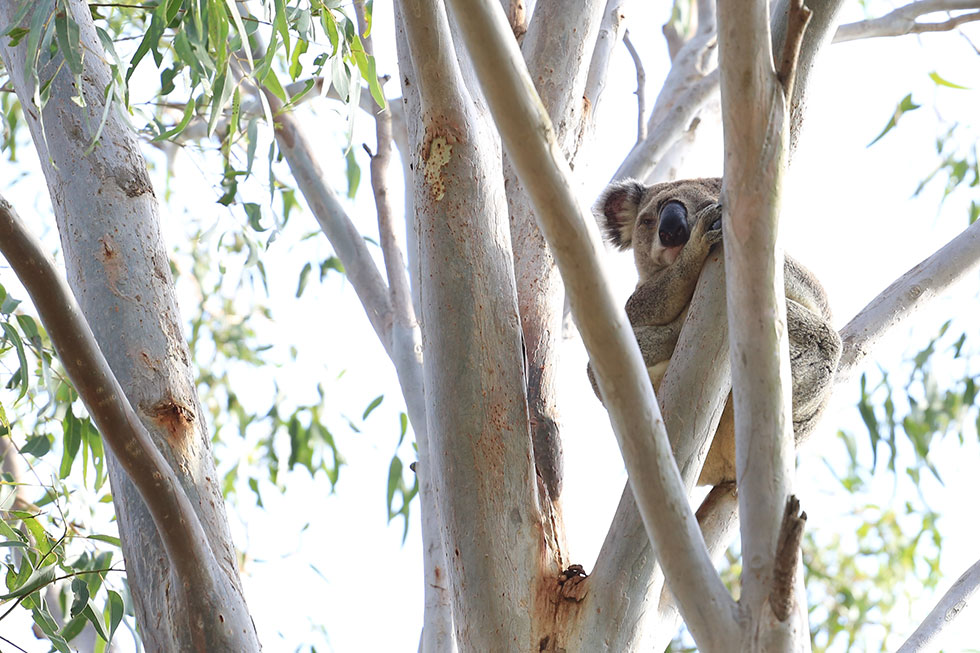 Koala brings many messages as one of the most world known symbols of Australia. Koala medicine brings questioning your relationship with lack and abundance. Endearing like a teddy, but definitely not a bear, Koala is a popular symbol of Australia. These unique creatures appear to have little intelligence. Their success can be attributed (in part) to their ability to live exclusively on eucalyptus leaves. There is a long-held belief they do not need to drink water.  In fact, their Aboriginal name means, ‘no drink’. It could also just as easily refer to the role they played in the Dreaming, keeping the valuable resource of water to itself rather than sharing.

In one well-known Dreaming, Koala hoards all the water in a time of drought[1].  The other creatures suspect him, so they send Lyrebird to track and spy on him (in some Dreamings, it is Wombat or another creature.)  In those days, Koala had a tail and Lyrebird saw him climb a tree, then hang by his tail from a branch to drink water hidden below in a hollow.  In anger and thirst, Lyrebird sets fire to the tree, dispersing the water.  Koala, in his haste to retreat, left his tail behind. (Perhaps Koala was originally a possum?!)  Also, you can still see the singe marks from this fire on the edges of Lyrebird’s two lyre (outer) feathers.

This Dreaming certainly answers a question that has mystified biologists for decades – why a tree-dwelling animal has no tail. Koala made an unwilling sacrifice that could have been avoided had he not been concerned about lack and not having enough – and been prepared to willingly share one of his assets (the water.) Had he been prepared to share his good fortune with others there would have been plenty of water for everyone to drink, and he would have recognised the spiritual truth of abundance.

Koalas were a popular food source for the Aboriginal people.  Even though Koala skin is the most insulating of all the native furs, using it was taboo.  This marsupial had to be roasted with his skin intact as a sign of respect.  In return, Koala would not hoard the water and cause a drought.

Koala appearing in your life can remind you to see what you keep secret from the outside world, what you hide from others – or even from yourself.  What could you share or look at more deeply?

In some Dreamings, Koala is an orphan, very much alone and ignored.[2]  It is interesting to note that even today babies lose their mothers by climbing onto a male’s back, and not realise until it is too late.  If you relate to the archetype of orphan in any way, examine these issues in your life more deeply.  How can you satisfy that orphan’s needs?  Koala looks cuddly and may be a message to seek out some hugs. Grab someone you care about and hug!

In a Dreaming[3] about the populating of Australia, a child removes the intestines of a koala, which forms a bridge (a coloured rainbow) to the new land. This Dreaming, like that of Whale, describes the first people here coming from elsewhere. In Western mysticism, it’s the rainbow bridge that takes us home rather than bringing us here. 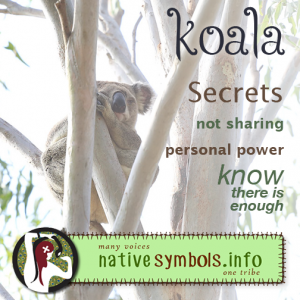