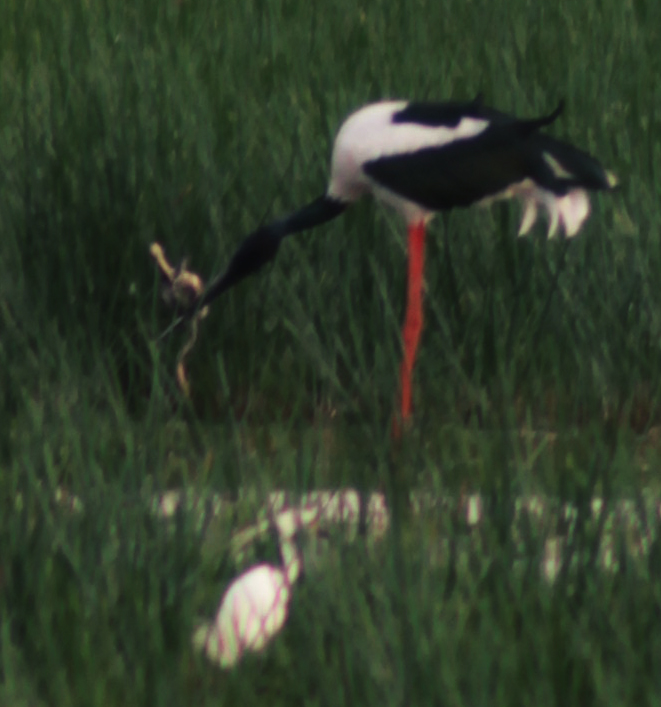 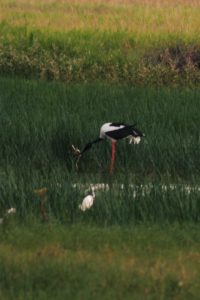 Australia’s only true stork, this attractive black and white bird stands an impressive 1.5 metres tall.  It’s large, powerful beak has been attributed to a spearing in the Dreaming, which also resulted in the bird staying around water to avoid its protagonist. “Jabiru” is not an Aboriginal word; it comes from the Amazon Indian word “zabiru;” as both share similar inflatable neck bladders.

The Jabiru, unlike other storks, is not migratory; however it does have nomadic tendencies. This bird is common on waterways and rarely appears in southern Australia. They have few predators, yet their numbers are dangerously low. Jabirus mate for life and both participate in nest-building and the raising of the chicks.

They are often seen as solitary creatures, the reason for this being that in the Dreaming, the Jabiru and Crow had a fight and Jabiru injured Crow in anger. As punishment, he was told to forever remain alone.[1] Loneliness versus solitude might be an issue in your life if Jabiru steps in.

To become airborne, Jabiru has to run a distance before he takes off with running jumps, finally soaring upwards on the thermal currents. This procedure is similar to the archetypal ‘flying dream’ where one runs to gain the speed and momentum necessary for take-off. If Jabiru appears for you in the process of lift-off, take notice of your dreams. The green tint to this bird’s black colouring also brings to mind the luminescent, ethereal qualities of the astral or dream world.

The beak of a Jabiru was considered a power item by the wirrinins or shamans of traditional Aboriginal tribes in the north. This bird  reminds you to calm your mind and body, and maybe even develop your intuitive and creative abilities by looking at your dreams and their meanings, and following through with any urges to ‘take off.’

The ‘running before take-off’ theme may be relevant in some aspect of your life. The momentum of the run will propel you into the skies, so keep on running and leaping, you will get ‘there’, wherever ‘there’ is!

Image: Jabiru with two catches of food! Turtle (?) and fish?