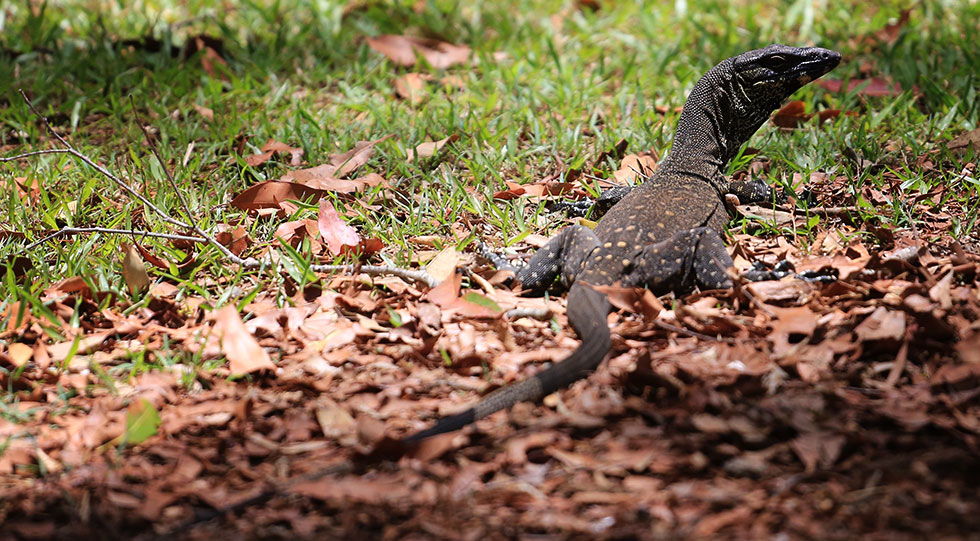 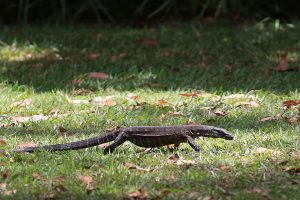 Goanna appears to be a corruption of the word ‘iguana’ and the term is only applied in Australia.  Goanna has made its way into Australian folklore and bush colloquialism.  They certainly have some strange characteristics.  One comic image of Goanna is running, lifting his front legs from the ground with his body held almost vertically.

Goanna is as good at running as he is defending himself.  They often make a hissing sound and inflate their bodies, threshing their tails which are capable of knocking a person over.  Their teeth, too, have a strong grip; partly due to the fact they slope inwards, increasing their tenacity.

And an interesting habit of one species is digging a hole, and then laying the eggs in a termite mound.  The termites repair the damage and the eggs are able to develop warm and safe from predators. The young dig their way out upon hatching. Innovative!

There are three groups of Goanna – those that live in trees, on the ground and in water; most live on the ground. A Dreaming accounts for this from the Northern Territory[1], where a crocodile enlists the goanna’s help in his revenge. In another Dreaming, their different colours have been attributed to ochres and sand or thorns painted and placed onto their bodies.[2]  Still other Dreamings[3] attribute their black colouring to scorch marks from fire. And it was a Goanna who made the first bark canoe[4]; he climbed a tree to cut the bark, and that is why, when threatened, he still climbs trees. 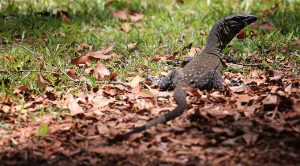 Generally, our brother Goanna is considered a thief, his thievery a common theme in several Dreamings. Today, this is reinforced by the way he raids modern camping sites and tents for tucker!

Goannas are predators, feeding on small birds and creatures;   some are cannibalistic.  Arboreal goannas are very fond of raiding birds’ nests for eggs and young; unstoppable against the parents who fly, swooping, screeching and squawking, powerless against the raider.

Goannas will also feed on carrion.  In this way, they are the scavengers or ‘cleaner-upperers’ of the bush.  Because of their predilection for carrion, their teeth and claws are unclean, leaving one prone to infection if scratched or bitten.  According to Aussie folklore, it was believed infection from Goanna bite returned year after year, never totally healing. Interestingly enough, in contrast to these degenerative beliefs, the oil extracted from their fat (which one would assume isn’t too copious!) is said to have extraordinary healing powers. Maybe the antidote to any problem in your life is found in the cause?

If Goanna appears in your life, think of how things would be if there were no goannas.  There would be lots of smelly, rotting, disease-ridden carcasses lying around!   It may be time to clean up some messes!

With Goanna’s interesting image as a character, be prepared for some unusual events around you which could evict an irrepressible burst of laughter!