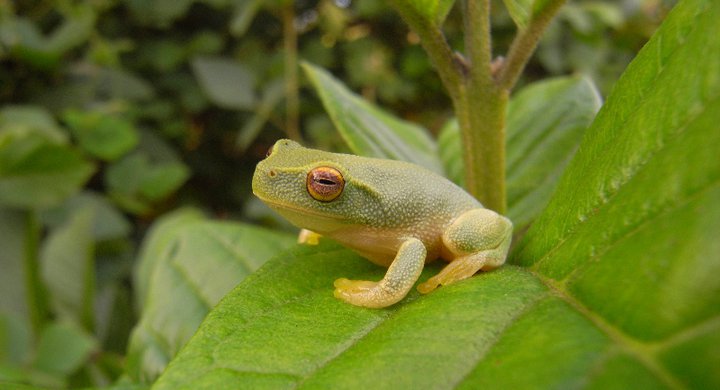 Frogs are found the world over.  Their relationship with water traditionally links them with the emotions, and the majority of the many native species live in areas which have a reasonable yearly rainfall.  Some frogs have adapted to living in the desert, breeding when opportunity favours it. They mostly live buried in mud or dirt, their bodies filled with a store of water. At times, these frogs were used as a source of water by thirsty Aboriginal people who knew exactly how to meet their needs in the harsh and forbidding environment of the desert.

Frogs are singers, and can be heard welcoming the rains; their thirsty croaking sounds as if it needs a good, cooling drink of refreshing water! Frogs do seem to be especially loud after a drought has broken!  A Dreaming from Northern Australia[1] claims the frog was mother to the Lightning-woman, Thunder-man and Woman of the Monsoon Rains, which explains Frog’s joy when these elements arrive. 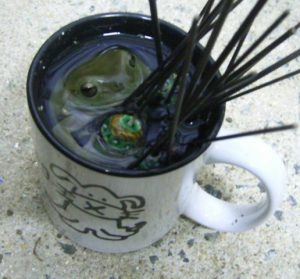 Frog with beads soaking on mandrels in a glass of water!

In a well-known Dreaming[2] about Frog, he is thirsty and greedily drinks all the water (similar in theme to Echidna, Koala).  When all the creatures realise what has happened, Frog wants to return the water, but cannot.  The creatures decide to make him laugh so the water will be pushed out of his mouth.  After many antics and no success, a muddy eel jumps up and down, squealing angrily at the frog.  Frog begins to laugh and as he laughs, the water comes out. He shrinks and shrinks until he is the size he is today.

If Frog appears, reconnect with your sense of humour! Frog was so serious it took someone else being equally serious (in an angry way) for him to realise how funny it all was.  So lighten up, Frog!

If this seems impossible, there may be a reservoir of unshed tears which may need to be released before humour emerges again. Frog’s thirsty croak, related to the human experience of body language and expression, could represent repressed words which are bottled up and awaiting release, hence the hoarse croak. (In other versions of Frog Dreamings[3], Frog continues to croak in an attempt to regain his once-beautiful singing voice. If this imagery relates to you, are you striving to re-create something which is no longer possible to regain?)

One of Frog’s purposes is to purify the water, as explained in some Dreamings.[4] When he doesn’t do this, and the water flows by muddy from silt, the kooris know there was is flood on the way. As Frog is capable of removing impurities until there is clarity, you might like to call upon his energies to gain a clearer understanding of anything which seems clouded or ‘muddy.’

Transformation is another energy of Frog’s. From an egg in spawn, to tadpole, to land-going creature, Frog is capable of changing to grow and explore new terrain, and to adapt naturally to the changes in his environment. (See also Lyrebird.)

In one Dreaming[5], frogs were created when a woman was abducted by a crocodile who kept her locked in a cave. She removed the heavy boulders by tying her hair around them, and pulling. When she escaped, she gave birth to long, elongated eggs which her tribespeople smashed open to reveal little frogs. Frogs have no hair, because this woman lost hers in her escape; and they can also live on land or water like their either of their parents.