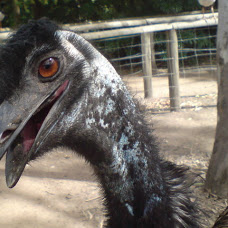 Emu has a very big place in the Dreaming and the energies of this land. Originally found everywhere, the settlements of white man have pushed Emu farther out, away from ‘civilisation.’ And the only way you can truly see Emu in the sky is if you too are away from town or city lights.

The largest bird in Australia, the flightless emu is a national symbol with the kangaroo on our coat-of-arms. There are many Dreamings about emu, including giant emus and kangaroos roaming the land, which may indicate the time when dinosaurs were on the planet.

Emu may be seen in the negative space between the stars of the Southern Cross, especially very late; his neck extending in the dark, empty spaces. In the Dreaming, (which continues into our present times,) Emu plays the role of a protector in the night skies. Before Emu is upright in the sky, the formation or shape between the stars is like a boomerang, its purpose, too, being defence against evil.

One could relate this concept of negative space forming the shape to the philosophies of non-thinking or being, as practiced by ancient monks to being advocated by modern mystics like Guidjeff and Eckhart Tolle.

Emu might not be able to fly, but I love the fact that he manages to suspend himself in space… heaven-borne…

Emu appears, as stated, in many Dreaming and seems to be interchangeably a male or female. Maybe this reflects how the roles of men and women have switched around with the male being the one who incubates the eggs. During the process, which requires sitting upon the eggs for eight weeks, he sits there almost continuously, eating very little and suffering a severe loss in weight.   The young follow him for about a year after hatching, and up to eighteen months in drought conditions.  A truly devoted Dad! Emu can emphasise issues around single fatherhood and men doing what is traditionally regarded women’s’ work or roles.

A well-known Dreaming about Emu has her seeking social status through manipulation.  Through trickery, she encourages Wild Turkey (or Bush Turkey) to kill her young so Emu, with more chicks, will have more status.  Wild Turkey, in revenge, tricks Emu into cutting off her wings.  To this day, Emu has a large clutch of eggs and cannot fly. And Wild Turkey has only a small brood and can still fly.[1]

Emu can highlight social relationships, friendships and how they reflect your self-esteem.  She may indicate a need to prove yourself in some way and so could be asking you to affirm your self-worth.  Finding the value in something which may seem to be negative may be a challenge Emu  brings. These days, emus are being farmed for their feathers, meat and eggs – value in something considered by many property owners as a pest! Emu oil has many healing and beneficial effects.

They certainly are comical birds with their gangly legs and curious nature. A ‘funny’ practice of cooking them involved burying the emu over hot coals with just his head and long neck above the ground. Emu was regarded as being cooked to perfection when steam started to emerge from his beak.

To the traditional Aboriginal person, Emu was a good food source, and different techniques of catching Emu have been recorded.  Many employ Emu’s innate curiosity and inquisitiveness – a child on his back pedalling his legs, something bright tied to a stick, and imitating Emu’s call are some ways used to attract his attention. Emu will investigate anything which is bright, for example, a red headband, colourful shirt or shiny earring.  So watch out, Emu is very curious and could peck! Perhaps this is where the term “Emu hunt” came from – an emu hunt is when a group of people get together to walk around and pick up rubbish off the ground. (Many Australian people will remember Emu hunts from their school days!)