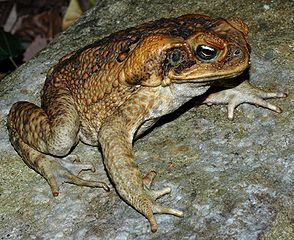 During the beginning years of Native Symbols, I lost the revised manuscript due to a computer shop screwing up and deleting the hard drive. I lost a huge amount of revision and new stuff. The way I have worked on this book and its concepts has been a continual process of adding, refining, deleting, rewording… so one of the newer entries I lost was Cane Toad. Luckily, I like to edit from paper and usually have a fairly recent printout. However the page with the cane toad entry was missing (probably secreted away by an artistic toddler for Art). I find it interesting, as the only introduced species in Native Symbols, Cane Toad has been the most problematic – just typical!

I changed some of my views about this feral creature in my research, but I still find it hard to overcome my abhorrence at their innate ugliness! Seeing the beauty in Cane Toad can be a sign of no ego; that state Eckhart Tolle (and other spiritual teachers and philosophies), describes as “the NOW.” There’s intelligence and wisdom behind cane toad’s eyes.

Cane toad is an introduced species that has grossly invaded our native shores with a voracious killing habit.  They breed fast and in multitudes. You can tell their eggs because they form glutinous strings (like snot!) Frogs have a foamy spawn.

Their mating call sounds like the dial tone on a phone. White noise after a while, unless they drown out the native frogs’ calls. That is Cane Toad, a real party pooper; the unwelcome guest who has made himself totally at home. In your space.

The Dreaming is not a static space in time, but a continuous thread through time.  Its modern form embraces the cane toad and its role as mass destroyer and nuisance. Many native species are adversely affected by cane toad, either as competition for food, or poisonous to their diet. Yet they were introduced to cull the numbers of a cane field pest. The ironic joke was on the farmers, the toad not only ate the pest, but whatever else got in their way including those useful things the farmers needed, causing a host of other ecological problems.

Cane toads are quite intelligent and can become used to being handled, making good pets if they weren’t so unpopular! It is their poisonous sacs that contribute to Cane Toad’s poor reputation, except with the ‘way out theres’ who fall for the urban myth of its use as an hallucinogenic drug.

Cane Toad is a part of popular yobbo Australian culture – at any markets you might find him recycled into purses and other items, or stuffed and in ludicrous poses, such as a beer in hand.

The impact of Cane Toad on Australia (and his travels have him covering a huge chunk of land now) has been largely negative. Yet really, he has done similar to what white man did when they invaded the land, bringing with them a wave of death and destruction too. Cane Toad is a microcosm of White Man.

Cane toads are often the subject of “acceptable” cruelty, from children to adults. The popular ways  to kill a cane toad, from golf clubbing, salt and disinfectant, involves a slow death – cane toad elicits compassion from few. Cane Toads bring revulsion to many. As the most ardent nymphomaniac –  a rotting corpse on the side of the road to suburban pond goldfish – he isn’t fussy! Cane toad caught in the act might bring his own personal and explicit message for you to ponder,

Cane Toad is one of the creatures you devise your own Dreaming about, if you encounter him. Revulsion, or an unkissed prince? Make up your own Creation Myth about how he came here, involve the ancestor spirits in nature and create a Dreaming to guide you, don’t think too hard about it, follow your muse. Identify any themes, and see if any have parallels in your own life. It only takes a couple of minutes to do, and you might surprise yourself at the insights.

And a great doco on the critters – Cane Toads: an Unnatural History, part 1: