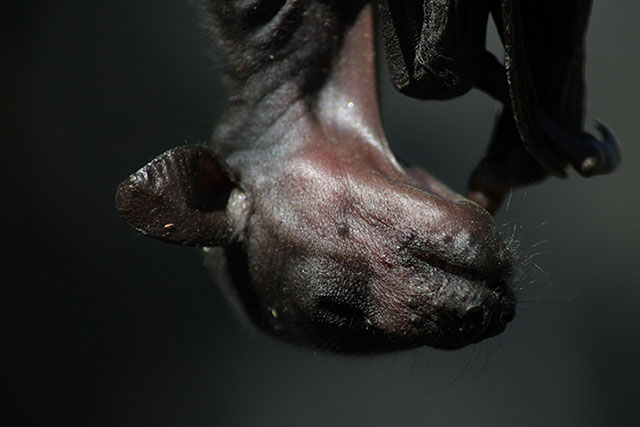 Bats are found worldwide and there are over fifty species in Australia.  Bats are the only mammals able to fly.

Bats use ultra-sonic echo-locating pulses during flight to avoid obstacles and to catch flying insects.  In human terms, it may mean being able to perceive things in an uncommon way; for example, the ability of synethesia where the senses are mixed (sounds have colors, or numbers a sound or smell.) Be open to experiencing the world around you in different or new ways.

Bat emerging from a cave or tree represents the archetypal energies of consciousness breaking out of a limited, enclosing perspective to soar in the limitless expanse of the universe. Think of Homer’s analogy of the cave. If you encounter Bat leaving his nesting place, be prepared for some changes in your life which may broaden your views.

Camps of flying foxes can be huge! A cloud of these creatures may indicate you will be part of a crowd in some way, or at least joining forces with a large-sized group.

It can be quite risky walking beneath a fruiting mango tree at night; it almost seems they toss mangoes as a warning not to come too close – so take heed if Bat sends such a message!

The image of Bat hanging upside-down in a tree is similar to the image of the Hanged Man in the Tarot.  If you see Bat in this position, don’t be surprised if your views or ideas about something are turned upside-down or life in general seems suspended!

One Dreaming about the Milky Way[1] states that each star is a flying fox transformed after a great battle. In another well-known Dreaming, themes around expressing anger are highlighted, so issues about control may be emphasised if Bat appears – be prepared to battle it out, either within your own conscience, or externally with others. Another issue, ‘favouritism’, may also be influencing your life in some way.

Traditionally, Bat symbolises two qualities – long life and happiness for the Chinese, and in some cultures, darkness and chaos.  Bat is often regarded as a symbol of death and rebirth.  In one Aboriginal Dreaming, similar to the Bible’s ‘Garden of Eden’ parable, the evil snake is replaced by a Bat which is unleashed when the forbidden fruit is eaten[2]. This bat brought death to the world and was seen as such a symbol. If you fear Bat, be prepared to face what you fear in life; most often, he symbolizes definitive change.