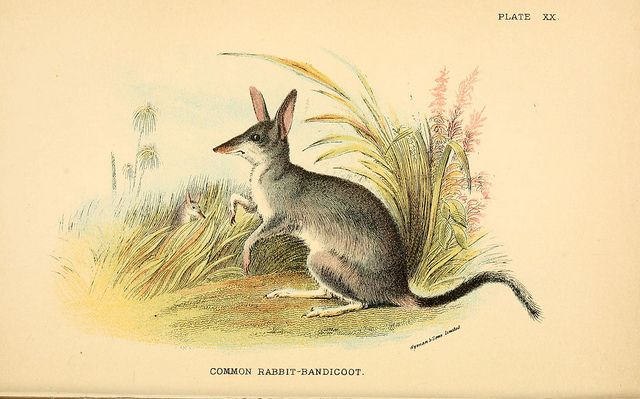 Bandicoot is one of the smallest of the pouched mammals. He always leaves conical pits where he has dug for the majority of his tucker; worms, insects, larvae and grubs. Contrary to popular belief, these creatures do not burrow, although Bilbies do.

“Lousy as a bandicoot” is an old Ocker expression.  Even though bandicoots are lousy with lice and ticks, they are very clean with their eating habits, wiping away any dirt from their food and themselves.  They are not so clean in their fighting habits, tearing and scratching bits of fur piece by piece, slowly wearing their opponent down.  Bandicoots are naturally pugnacious, well known for their belligerence and ferocity in fighting.

In one Dreaming[1] about Bandicoot, before Death first came to the land, he argues with the Moon about the nature of death. Moon states that when one dies they will be reborn in the same body, and Bandicoot disagrees. The discussion heats up and in anger, Moon throws some dirt at Bandicoot, creating his spots. He then decrees that Bandicoot wins the argument because when he dies, he will not be reborn, however Moon will be. Had Bandicoot believed, we all would be born again as who we are instead of in another form or body. Moon is always reborn as who he is.

Bandicoot has meaning in your life, especially if encountered at night with the moon shining, could point to the concept of reincarnation – senses of deja vu, precognition,  intuition, the energies of rebirth and change and meeting new people who seem like old friends; are all under it’s influence.

Bandicoot may highlight misinformed judgements in your life. These marsupials have been much maligned for the damage they cause foraging in gardens, however this damage is minimal compared to the good they do in removing excess insects.  Bandicoot can point to a belief which is not in line with reality.  What erroneous beliefs do you have? Bandicoot could also call for persistence and ruthlessness in some area of your life.